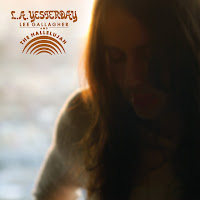 Who is Lee Gallagher? Not a family member of the Oasis twosome. I'd guess from listening to L.A. Yesterday. I can't answer the question as I had never heard of this artist until the album landed on my virtual doorstep. After the first listening session I was sold.

Lee Gallagher's music reminds me of the Jon Allen album of over a decade back, with that radio hit on it I can't remember the name of right now ('Dead Man's Suit/'In Your Light'). With one difference, I like all the songs on this album. L.A. Yesterday has a nice rough edge that goes far beyond the rasp in Gallagher's voice. Where Jon Allen polished everything up or more likely this was done for him, Gallagher leaves those edges in tact.

The result is that I'm hearing Fleetwood Mac of the mid 70s, country rock, ballads and The Faces/The Black Crowes with better songs and everything in between. A lot in music of the past 50 years comes together on this album in a glorious way.

Listening to the album for the first time something struck me. During dinner that evening one of the sons said that in Japan a man married a hologram. WTF?, I thought. Later that evening I heard Lee Gallagher singing about making love to a hologram in 'Goodnight Sweet Maria'. What happened recently? Have I missed out on something? Anyway, I'm not about to trade in the real thing for some time soon I hope.

It is in the song I just mentioned that all these influences come together. I almost like 'Goodnight Sweet Maria' as much as Dirty Sweet's 'Delilah' and in this line of 60s - 70s - country - roots - rock my compliment can not be much larger. A great melody adorns the song, a blistering guitar solo, a sweltering organ and passionate singing, including a beautiful soul choir. Man, what a song this is. The pinnacle of L.A. Yesterday, but a pinnacle is nothing without a solid structure and believe me the rest on the album provides with ease it seems.

For one thing, Lee Gallagher sings like he means it. There's no holding back if he doesn't have to. There's passion on the album, without overdoing it, so that it counts where it matters most. Ten songs that show the best he's got. In other words, there's no filler found here.

Lee Gallagher worked out of San Francisco for his first steps in the music industry. For L.A. Yesterday he relocated to Los Angeles to work and record with producer and guitarist Jason Soda. This work became a mix of old and new friends working on the record. The combination worked out quite well. L.A. Yesterday is mostly on fire. What I can't stress enough is that the songs are exceptionally good. The result is a special album that everyone loving this kind of music must check out. There's simply no disappointment possible. This is rock and roll and soul like it is supposed to sound.

You can listen to and buy L.A. Yesterday here: