Prepared For A Nightmare. Mayflower Madame 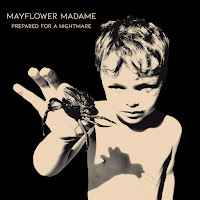 Another band from Norway, Oslo to be precise, enters WoNoBlog. Mayflower Madame is a trio that has been around since 2011. Prepared For A Nightmare is the band's second full length album after 'Observed In A Dream' (2016) and the EP 'Premonition' (2018). Musically it is more in line with bands from the early to mid 80s and neo-psych bands like The Black Angels than with personal favourites from Norway like Madrugada, Soup or Motorpsycho. Let alone Kaizers Orchestra.

There's a reverb and a little delay on nearly everything on this album. The music is as such not even that dark, it is the tone of voice of singer Trond Fagernes that defines most of the darkish atmosphere in the album. Lighter for sure than Robert Smith and The Cure in their most depressing period, 'Faith' and 'Pornography'. Fans of that period of the band will find something to get used to on Mayflower Madame's new album.

For me the music goes a step further than The Cure ever did. It is somewhat louder and tighter, but also upbeat. The classic synth sound in 'Swallow' e.g. gives the song a piece of fog touched by a street lantern. It needs to be observed that there is nothing new on Prepared For A Nightmare. It has all been said and done before and in some cases better. Having that out of the way, I can observe that the Norwegian trio, Havård Haga (guitars) and Ola J. Kyrkjeeide (drums), certainly knows how to use examples of things that came before and turn them into strong new songs.

In the background Kyrkjeeide pounds his drums. The guitars are a different set. Of course the bass takes care of the deep end but has to fill in a large aspects of the musical spectrum. The lead guitar is light in sound and plays arpeggiated notes. In the background there's almost always a few guitars spewing out dark chords, creating a very layered sound. As an extra a synth is added at times creating worthwhile extras at that.

Prepared For A Nightmare is not an album for all days/times. I definitely have to be in the mood to undergo a load of darkness for this long. In part this has to do with the one mood the album is largely played out in. Some variation could have helped here. The mood is very consistent over the record. Long Norwegian winter nights are certainly reflected on in the music.

So it is nice to hear the variation worked into 'Endless Shimmer' and the synths woven into the song. Little extra layers built into the music. Also the singing is mixed more prominently than in other songs, making 'Endless Shimmer' stick out immediately.

Reading up on the review so far, I decided to park it for a few days and do a test. I started the album somewhere in its second half to see what the effect of the music would be on me. I find 'Goldmine' instantly good to listen to. So my conclusion has to be that the music Mayflower Madame presents is too much of a good thing for me. Only to be digested in smaller portions. Then it works really well for me.

You can listen to and buy Prepared For A Nightmare here: