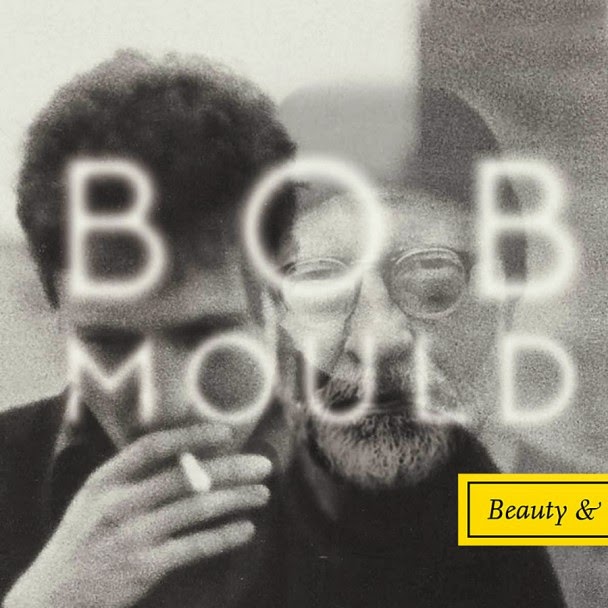 About two years back Bob Mould featured on this blog for the first time. I also had to admit that I had missed everything that he had ever released before. Sugar and Hüsker Dü were nothing but names and it doesn't look like I will ever catch up. 'Silver age' was that sort of album that certainly made me want to listen to Beauty & ruin. It's time to alternatively rock out at full force.

Some albums take a million words to explain what is going on. Beauty & ruin is not that sort of album. The cover shows what 30 years do to a man, to be more precise, this man: Bob Mould. From a young guy with the world to conquer in front of him, but staring downwards, to a middle aged man with beard and glasses, with most defining moments in his life behind him, looking us straight in the eye, albeit somewhat resigned.

That man presents us a straight alternative rock album, full of zest and life. Beauty & ruin sparkles and as if it's the most normal thing in the world, lets us hear where a band like Foo Fighters found the mustard. If a song like 'Monkey wrench' or that great single from its last album 'Walk' gets airplay, then why not circa half of the songs on Beauty & ruin? Bob Mould's songs are just as good. In fact, I like them better, as I never sit through a Foo Fighters' album. And if I have to mention one song as an example: 'Tomorrow morning' is the perfect single.

Like the last albums of Dinosaur Jr. Bob Mould claims his space in the rock pantheon with his latests efforts and quite rightly so. He rocks out loudly with rough sounding guitar layers stacked upon each other. For the interlude a more poppy 'Forgiveness' is presented. A convincing song musically. Whether his voice really fits this sort of song is a matter for debate. On the edge, I'd say.

Ending my review for 'Silver age' I wrote: "Silver age does not have one song that totally stands out, positive or negative. It's an album to enjoy as a whole". It's that time again to sit back and play a whole album. Beauty & ruin has that same rare quality, that at the same time may be its pitfall. This album is so consistent in quality, it's almost scary. And that, dear listener, is about all that is necessary to write.

You can listen to 'I don't know you anymore' by clicking the link below.