Houses of the holy. Led Zeppelin

Early this month Erwin Zijleman, who regularly posts from his blog (Krenten uit de pop) on WoNoBloG also, had his birthday. This allowed him to do what he wanted or so he stated and wrote a post on Houses of the holy by Led Zeppelin (click here), stating this is my favourite Led Zep album. Coincidence has it that I also have had a birthday recently and Houses of the holy is my favourite Led Zep album as well. As I always do what I want, I decided to give my view on this album.

First a little on Led Zeppelin and me. I remember 'Good times bad times' entering the Top 40. I remember 'Whole lotta love'. What a great song that was. I even tried to buy it in the small Noord-Brabant town where I spent part of my youth, but came home with 'Marie Jolie' of Aphrodite's Child instead. They did not have 'Whole lotta love' and the message was that it would stay that way. By the time I had enough money to buy albums, Led Zeppelin had faded from memory and was more than over for me. It was at university that my friend and sometimes contributor to WoNoBloG and Magazine, Lebbol turned me onto Led Zep again. I found out that I like the first album a lot, that III goes a long way but that I couldn't listen to any of the others as a whole. From 'Physical graffity' onwards it sort of stopped totally. Things went too far over the hills for me. Except for and you'll have guessed it, Houses of the holy.

Starting with the cover that in 2014, 41 years after the release, may be unacceptable, the album intrigues. The start, 'The song remains the same', is so full of promise. Fast paced, exciting and so melodic, despite the typical Jimmy Page stop start riffing. John Paul Jones' popping bass and the hard hitting John Bonham behind both. Because of the endless guitar overdubs, there is more like a rock orchestra than a trio with singer playing. After 1.30 minutes the mood changes and Robert Plant comes in: "I had a dream". 'The song remains the same' is Led Zeppelin at its very, very best. There is so much going on in the playing, the rhythm that holds slightly back the whole time, as if delaying time, and Robert Plant singing his balls off. Like they are being squeezed too enthusiastically by one of his groupy friends.

'The rain song' comes next and takes the mood in a completely different direction. Folky, some slight 'Stairway to heaven' recapping, delicate and loving. "This is the spring time of my loving". John Paul Jones sets the stage with a mellotron laying this deep layer of emotions over 'The rain song', giving it a hint of mystique and classical music. At the same time Page is doing this beautiful stuff on acoustic and electric guitar. A few piano notes come in, a bass and then finally Bonham plays along: with brushes! One of the most powerful drummers ever, playing with brushes. Almost lovingly, caressing the skins of his snare. To some the song may be too long, but if you let it envelope you, it's the kind of song I do not want ever to end.

'Over the hills and far away' is another folk kind of song. Of course this was not new to Led Zeppelin. Half of 'IV' is folk based. Also 'III' has the first songs, think of 'Gallows pole', that betray that folk is a big influence of the band and not just the mix of Chicago blues and late 60s rock coming out of the States and the U.K. that set Led Zep on its path to immortality in 1969 and 1970. This mix of rock and folk with some mysticism made the band unique and gave them the song they will always be remembered for, 'Stairway to heaven'.

I can proudly say that I once could play something coming clsoe to the intro to 'Over the hills and far away' on guitar. The song has this great rolling guitar playing, before going off into somewhat harder twists. It is again Robert Plant who really carries the song. His high, slightly strained voice sings all the right notes, but let's not forget Jimmy Page's solo here. It starts of beautifully, before setting off for uncharted territories and bringing it all back with another unexpected twist in the song. Everything was possible and could be explored. There did not seem any limits. Listen to how 'Over the hills ...' ends. 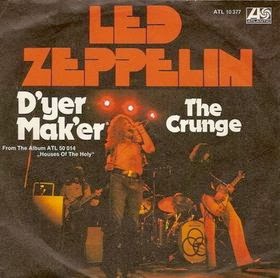 Doing a James Brown outing. 'The crunge' and a little further a reggae song, 'D'yer mak'er', proves
that there really were no limits to Led Zeppelin in 1973. Yes, 1973. So we have (now classic) rock, folk(rock) and soul and reggae. It's pure blues that the band had left behind in 1973. On record, not live. I'm not a reggae fan, some famous songs apart, this is my favourite: 'D'yer mak'er' (or Jamaica).

'Dancing days' brings us back to the classic rock the band is famous for. Another song that has the typical Led Zeppelin playing. With hitting on the two and four, Bonham creates a delayed rock song, where most bands play on the one and three. Again John Paul Jones lends a signature keyboard sound to the song. This man's arranging skills are perhaps the most underestimated part of Led Zep. He comes up with many special sounds, making Led Zep more than just your average run of the mill blues-rock band. He may be the bass player, but then some more.

Now it's time for the pièce de résistance: 'No quarter'. Just the way the mood changes, e.g. 0.52 seconds into the song where it happens for the first time, is heavenly. The change from the moody, dark, brooding first part of the verses, the treated, muffled sounds, to the melodic part, with the guitar eruptions of Jimmy Page, is so fantastically good, that it sets 'No quarter' apart from many songs. Add some classical piano playing in the middle, utterly alone, destitute. The effect is brilliant. The clear sound over the underwater sounds of the organ. Words fail beyond here. 'No quarter' set the stage for 'Kashmir' on 'Physical graffiti', the epitome of this side of Led Zeppelin.

'The ocean' ends it all. Riffing like 'Black dog'. After the beauty that went on before, it's a bit like "mud on a flagship". The switch is pretty, too great, but wait. All of a sudden there is just a subdued "la-la-la" part, totally un-Led Zep like. A cappela!. 'The ocean' is a Jimmy Page song all the way and then the miracle happens. The pace changes in an instrumental part. Even doo-wap a doo wap's fly around. But also here there is a guitar interlude, that turns 'The ocean' almost into a different song. These momentary switches in a song, that alter everything. And so 'The ocean' is turned into another brightly coloured flag on the flagship called Houses of the holy.

There is only one conclusion possible after listening to Houses of the holy again for several times: Best Led Zeppelin album ever. Not the best individual songs, but as a whole? Yes it is as it is totally consistent in quality and performance. One of the best albums of the 70s easily and certainly top 100 material ever.

You can listen to 'The song remains the same here' here.
Gepost door Wo. op 11:03