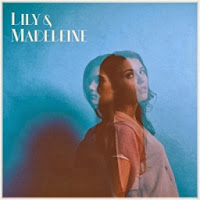 Erwin Zijleman put me on the scent of this duo, so if you missed his review click here.

And now for something completely different. A romantic world of two teenage sisters, Lily & Madeleine (Jurkiewicz) gracefully flows from the duo's debut album. Pure, unmolested beauty. Two harmonising voices that weave in and out of each other, creating a fairy world in which it is so good to linger for a while. A world full of longing: "Someday I'll find the right words and I'll bloom where I was planted long ago", As I wrote, something completely different..

The Jurkiewicz sisters come from Indianapolis in the U.S.'s midwest and found a place to record with Sufjan Stevens' label Asthmatic Kitty. Together with their manager/producer Paul Mahern, who created the sound around them and Kenny Chambers, who co-wrote the songs, they are responsible for Lily & Madeleine, the album.

Basically I could stop writing here. Just put on a headset and immerse yourself in the two voices and a little in everything happening around and behind the voices. If this does not convince you, then you are either no fan of the ethereal beauty of this record or worse, deaf. But I will not, stop writing here. Not before I point out that the singer-songwriter songs of Lily & Madeleine are steeped in tradition. 'Nothing but time' could have been a The Mamas and the Papas song, if we bar the voices of John Phillips and Danny Doherty. 'Disappearing heart' reminds me of Harry Nilsson's biggest hit 'Without you', just down to its essentials. This is the right description for this album. Lily & Madeleine have recorded great songs with a minimum of effects. A song has two guitars interplaying, and add e.g. a bass or a violin. Enough is enough

Most songs are in a slow register. When the tempo goes up, like in 'I've got freedom', this not only is exactly the change the album needs at that point (song #7), 'I've got freedom' also totally convinces as a Lily & Madeleine fun track. The handclaps, the added electric guitar notes, all lively up the song. This atmosphere is kept up in 'Come to me' with the brightly sounding guitars and the dry hi-hat and snare drum. The singing and the tempo changes do the rest. Another song that truly sticks out.

Not all is well though. The singing of Lily & Madeleine, beautiful it may be, is a (perhaps too) solemn affair. Almost as if they are obliged, again, to sing at grandma's birthday or that party with all the neighbours present. A little more emotion would have made this album perfect. Now there is something to strive for. Also there are tiny finger fret misplacing mistakes, but this gives the album something authentic and can only be heard when listening very closely.

Having said that, it is the beauty of the two voices that win out, easily. The voices of Lily & Madeleine flow so easily, sound so perfect together, that years of singing together betray themselves. The record sleeve very symbolically portrays just that. Fans from The Everly Brothers to Simon & Garfunkel have something new to check out. A new duo presents itself to the world and the world would do best to listen. A song like 'Paradise' is worth a small fortune by itself, believe me.

You can listen to and buy the album on Lily & Madeleine's bandcamp website.