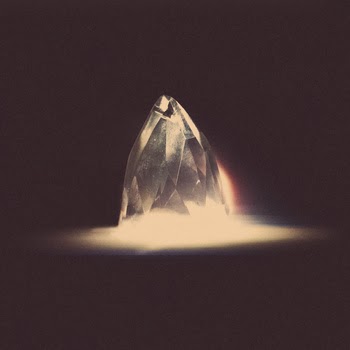 Another band that made De Wereld Draait Door this week was The Future's Dust. Another band that in the most recent edition of Oor Magazine is mentioned as Dutch talent for 2014. As my girlfriend regularly watches this show, again she sent me a message to check The Future's dust out. Which I did. The song they played in DWDD was quite special. (Watch 'Tinderlight' here). The four songs on the EP even delve deeper. What moodswings, sinister playing on emotions, emptiness, mystique. The Future's Dust puts itself on a map. Which one is not exactly clear, as this is so far from your everyday music, while at the same time it performes estranged beauty of a superb order.

Yes, it is quite easy to start throwing names around. From Kate Bush's mysticism, to The xx's emptiness and boy - girl singing, to someone like James Blake (who I do not appreciate very much). It is ultra modern music, it is age old and above all complex in the rhythms. Listening to 'Dreamer', the third song on the EP, with its electronically treated vocals, I can imagine ghosts being evoked in the woods of the prehistoric age. The ultimate darkness, the fluttering of leaves and the shapes on the thick tree trunks, the moving, large and heavy branches. The scariness of it all, that moved and inspired our prehistoric ancestors into the fear of Gods and witches.

The Future's dust is a new band from Leeuwarden in Friesland. The five band members also met at a Popacademy. The education must have become very good as one band after the other leaves the academy with a great album and first prestigious show under their belts. Marrakech does not leave much room for another conclusion, than that it is a great debut of this young band.

The music of The Future's Dust is all mood and atmosphere. From this the shapes of songs are built. Starting with the very clear and dry drum sound. Many rimshots come by, laying dry accents underneath each song or carrying whole parts of songs as all melody comes just from singing. Less is more for large parts of The Future's Dust's songs. When 'Dreamer' finally goes off with the guitar and the synths, it comes like a welcome release.

Another thing I notice that the songs seem to go over into each other without a stop. The same drum sound, as if nothing has changed. The difference comes with the singing. It's all of a sudden a different melody, catching me by surprise.

Single 'The fields' is majestic. There are elements that remind me of symphonic rock, without it ever coming close to prog. It is in the mood that The Future's Dust manages to conjure up. Dreamy, a summer holiday on a small boat drifting on the slow current of a river, without knowing what is around the corner. Ideal relaxation, but always a need to be on the watch out. Just as mysterious as the covers of the EP and the singles. Beautiful artwork by Luca Venter, that plays with the light and the shade, just like the music of the Future's Dust.

No one knows what the future will bring, but it does not take much imagination that The Future's Dust first album scheduled for the second half of 2014 may be a stunner of a record.

You can listen to and buy Marrakech here.
Gepost door Wo. op 13:42