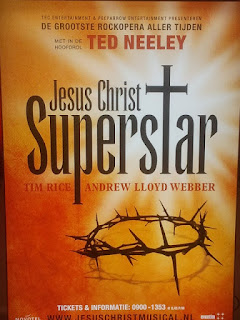 "The best rock opera ever", read the claim on one of the banners inside the World Forum. Well, no doubt about it. The power of the music, the songs and the performance all underscores the claim. I am so glad that I bought myself a ticket.

In 1972 I was taken along to a musical called 'Godspell'. I can't remember much about it if I'm honest. Just a feeling of being in awe of an event of this scale, in a theatre. Why this is relevant, is that it prepared me for that movie that was going to come in 1973, the film adaptation of a musical I had heard about of course. Knew songs from as there were several hits through the years from that musical. The movie I remember quite vividly, probably also because I've seen it more than once since, but also from that first showing in a movie theater in Breda called 'Grand'.

The music from the movie is with me ever since. The album can be counted as being among my favourites of all time. And then there came these placards around the country announcing the musical with Ted Neeley in the starring role. That seemed odd at first. How can a 70+ man play the 30 something Jesus? I set myself over that and went.

In the hubbub before the show, there was faint music seemingly coming from the stage and not the PA. At first I could not make out what I was hearing, until I heard Robert Plant's familiar whine. But what song? It was more as if the music was there to prepare, to motivate the people busy on the stage behind the curtains than for us, the audience. And then that famous, fierce drum intro broke loose and there was no longer any doubt which album was being played: Led Zeppelin IV; 'Rock And Roll'. The final boost for all already on stage. Let's kick some ass: ROCK AND ROLL!

From the very first notes I was moved and spellbound. The intro notes of the electric guitar, that scary piece of music, sent shivers down my spine and made the tears run over my cheeks. It was simply a very emotional moment and there were several more to come. When 'Judas'  started singing his opening song 'Heaven On Their Mind', heaven on earth was reached. It just doesn't get much better than this when talking about musical experiences. I put it right there with hearing Paul McCartney live for the first time in 2012 and 'Hair' in the mid 00s.

The magic of the theatre is played out beautifully. What light can do! Show something which did not seem to be there before and make something disappear. The revolving bandstand that at the same time is a moving stage and is used to create constant motion and distance. The flights of stairs on the scaffolding are used constantly and are used in support of the maddening crowd. The hats of Caiaphas and Annas that remain fantastic creations. Two actors who could have stepped into Rammstein without anyone noticing, as my girlfriend commented. When 'Annas' grabbed an electric guitar to play a blistering solo in the grand finale, he showed her right to.

If you know the musical, there's nothing new I can tell you. For those who don't, go out and listen to it. What I would like to share is the beauty and the power of this musical. All things human come by. The two sides of Jesus, man and God, are shown so well. The doubt of doing the right thing versus the strength to carry it all through in the conviction of making the right choice. It is all there. The role Judas has to play, as it is all ordained. It is easy for Jesus to forgive him. Judas is just playing his part in the story. Without Judas no Christ's passion. So who are we to condemn Judas, right? He condemns himself and drives himself into insanity and a cruel ending.

The hypocrisy of the people, not only because the choir plays both sides, but because it undoubtedly is true. And what was Jesus for some? A religious figure? A fundamentalist for others? A (wished for) insurgent to a third? Probably all, as, if the story is even faintly true, he was a threat to many in oh so many ways. The doubt of doing the right thing of making the right decision as a leader id played out fully, except by the man to whom he poses the biggest threat: king Herod. The water with which 'Pontius Pilate' washed his hands, turning into read while he does so. Such a great little detail.

The man Jesus needs love and attention to. "He's just a man", as the 'Mary Magdelen' character sings. He wants it and gets it. She gives it.

As in the movie the musical highlight is the 'King Herod' scene. One small role, only one song and the actor takes it all for 110%. What a feast in a late 70s disco glamour kind of way.

During the lashes scene, the audience is shown that little has changed since the year 33. First I thought, this is too much of a good thing and doesn't belong in this musical, but during the counting and the driving music, the message got across loud and clear: nothing has changed, really. Violence, occupation, intolerance, war, more violence and more hatred. 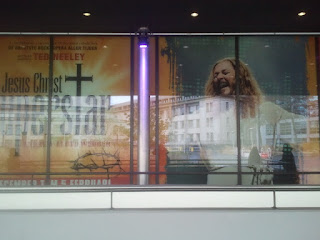 And then something bizarre happened. 'Jesus' is led away, the stage goes dark and the audience starts clapping as if the show is over!?? Eh, something important still has to come, people. Then, on the stage curtain letters are shown: "1984 years later". How symbolic! We see 'Judas' dressed in white on one of the lounge sofa's of the World Forum starting to sing the title song of the opera, 'Superstar'. Not much later a few lights are turned on in the theatre, a side door opens and 'Judas' walks in with the female "angels" in tow and 'Jesus' following, gracefully, resigned. While under way to his crucifixion the audience starts clapping along to the hit song enthusiastically. Elated about having the stars of the show in their midst. So there is the most bizarre of contrasts: people are clapping to a very much loved song, while the lead character of the musical, 'Jesus', is led to his imminent death. The same feeling I get when I see people applauding the funeral procession of a famous person who is brought to his final resting place, transposed to a musical theatre. Once I realised what I was doing, I felt so embarrassed, almost ashamed. Clapping a man to his death, "will you die for me", that most shocking of lines in this musical, cheered on.

A grand finale with an audience that kept silent when the last note was truly played. The spell was broken by the conductor of the band (and presaged by a smile from the bass player, showing it was over). Then all lead players were brought back with the music of their signature song. Under a fantastically large applause.

Yes, the audience average was 60+ and a lot older people were there, more females than males, and yes, Ted Neely's voice isn't what it used to be and not all in the cast were as good as the movie originals, but that all did not matter. This was a stellar performance, a great show and one of the greatest stories ever told. A story that effected the lives of millions over two millennia. A story that still affects millions upon millions, for good and for bad. For me it is a story, but with some eternal truths and values that help people abide by ethics and rules that we need to get through this live with some dignity and peace as without them we are quite lost as is shown, unfortunately, on an almost daily basis. Now I still know the story from the church of my parents and grandparents. The generation after me? I seriously doubt it.