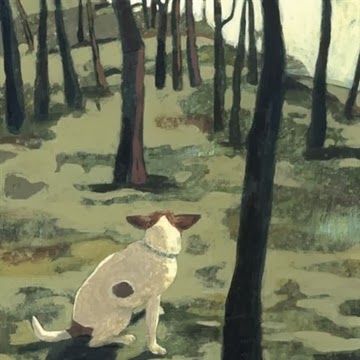 It's time for a review of another band that basically is giving its music away for free on Noisetrade.com. The last weeks I've regularly listened to this album with a rather strange name. Does it allude to deafness? Of a specific kind of deafness to the music of this band that goes by the name of Roman Candle? Those expecting late night romantic music to play by candlelight and a glass of dark, red wine, you can either stop reading or, and that is certainly the better option, keep on reading and let yourself be surprised.

Oh, tall tree in the ear is an album that can be pinpointed in the rootsrock segment. In short we are in the U.S. of A. with bands like Gin Blossoms, Dirty Sweet and Tom Petty and the Heartbreakers. Bands that like a portion of rock, but always with a warm organ and sometimes with more country oriented snare instruments like a pedal steel and banjo. Roman Candle does both and excels without being special. And with music like this there is no need for being special. It's about being playing good old music and having songs with stories. Roman Candle delivers just that.

Roman Candle is a band from Chapel Hill, North Carolina and is around since 1997. Roman Candle consists of three Matheny's, Logan, Skip and Timshel. Googling the band I just found out that Oh, tall tree in the ear is not a new album (2009), but the band's latest until October 2013, when 'Debris' was released. In 2006 'The wee hours review' was released to critical acclaim in the roots section of journalists. For now let's focus on 2009.

Roman Candle presents itself as a band that is able to rock, e.g. 'Why modern radio is a ok' and show introspection, e.g. 'Sonnet 46' on the same album. Both songs are presented in a great way and are interesting in their own right. The singing has this edge of roughness, with the suggestion of having seen all the right and wrong things in life to present songs of this kind in convincing ways. Skip Matheny has this all and is a great asset to the music on Oh, tall tree in the ear. At times it is like his voice will breakdown any moment, a strain at the edge of his vocal chords. Disappearing the next moment, laying some extra emotion and warmness into the song.

'Starting from scratch' is perhaps the finest example of this. Next to that there are all these keyboard sounds injected into the song by Ship's wife Timshel, giving the song a whole new level to dig into. Where on the other side Roman Candle can rock in a way that comes close to Rod Stewart's 'Hot legs'. The two approaches lay far from each other, but it gives this album that little extra that makes it so much fun to listen to.