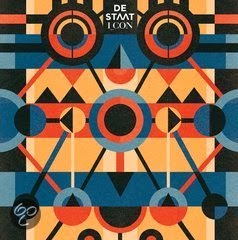 And every once in a while it happens. A record is released, I sort of notice it, but the album disappears from view into the unconsciousness. Today I make my amends to De Staat, by publishing my review of I_con, released in October 2013. Vaguely I remember a comment that De Staat tried to capture sort of everything on record and that I wondered at the time what would that sound like? I know now. So come along.

De Staat is three albums underway. Starting with 'Wait for evolution' in 2009, followed in 2011 by 'Machinery'. The music of De Staat is best defined as a robotic form of industrial rock. Staccato played rock that never forgets the melody, no matter what eruptions of pure noise are going on as well. Torre Florim leads his men through rhythm patterns and changes that vaguely remind me of Frank Zappa, without the music ever coming close for one second. The growth from 'Wait for evolution' to 'Machinery' was tremendous. Superb songs, not for your every day listening, but superb none the same. Added to that was a great show at Werfpop 2012, showing what a great band De Staat had become (You find that review here). So where is De Staat at in 2013?

Even at first listening I can declare that there is another giant leap taken here. What an overwhelming amount of influences and impressions are hurled at me. Wow! The start may be hesitant, after a few seconds the full band bursts free and doesn't stop rocking loudly until the very last second of I_con. The record with all sorts of music on it? It may well be. An encyclopaedia of music I_con may turn out to be. Listening to I_con is like listening to 'Sgt. Peppers lonely hearts club band', like 'Freak out' or 'One size fits all'. At every new turn in the record another surprise. No effect goes unused in trying to make a song better or having it make a bigger impression than the one before it. I can't tell you yet whether I_con will ever be as esteemed as the albums I just mentioned, but it definitely has the same effect on me, listening to it for several times now. My jaw just drops at times. Wow! Not unlike The Kyteman Orchestra nearly two years back.

Now having effects in music does not make a good, let alone a great record. So where is I_con on this score? It starts with just a hesitatingly played guitar. 'My bad'. It's even listed as a song, where all band members "laugh" and singer/guitarist Torre Florim's contribution is swearing. It stops, starts over now called 'All is dull'. The guitar plays the same chords, in the same way. And then it just happens. De Staat kicks in, full force, full blast, laying down a statement. There's no other word for it. And this is just the beginning of the journey. A journey that took me to several extremes. At first I had the impression that Queens of the Stone Age was the main travel guide on the journey. At second guess I've opted for Masters of Reality. I_con is much more playful than the average QOTSA album. Going from loud rock, to immeasurably loud dance influenced pounding. From dreamy songs, to 60s psychedelia infused rock or downright dance rhythms with eastern melodies. De Staat takes it all on. There is even a sequel to Iggy Pop's 'The passenger'.

How extreme things are is shown is the first few songs. 'All is dull' is a loud rocker ending with Tarzan like screams of victory, announcing who is victor here. This changes into a 'For the benefit of Mr. Kite' sort of carnival song. Like sitting in a merry-go-round, whirling around and around. 'Build that, buy that' gives just that impression. Added with some Kaizers Orchestra/Franz Ferdinand kind of (counter)rhythms and melodies. 'Devil's blood' is dreamy, slightly psychedelic. 'Witch doctor' pounds my brains out. And we are only four songs on the road. A map of all sorts of music indeed.

Not all songs on I_con are instant faves. The dreamy Masters of Reality ones are totally my favourites, followed by the harder rocking ones. It is the more out there songs that I clearly have to get used to, but they are also the ones that make me go wow! De Staat is taking on all this extra weight and clearly growing from it, becoming a better and more diverse band. Live it may just be utterly spectacular. The pulsing and pounding fast-paced rhythm of 'Make way for the passenger' that also allows for spectacular guitar work, accents and Cossack harmonies, may be a total winner live. Pandemonium and moshpit. It is at moments like this that I fully realise that De Staat has taken its music to another level. 'Machinery' had its moments of "what is happening here?", I_con has so many more and the much better songs. The balance between effect and song is so much better. De Staat once started as a solo outing of Torre Florim, which needed band members to play live. De Staat AD 2013 is a band. Excuse me: A Band. The growth is fantastic, the potential for much more so obvious.

And when I thought I had heard it all, along comes the totally mesmerising 'I'll take you'. A song sung by Florim and his partner Janne Schra. The light and the shade, the beauty and the beast, they meet somewhere in a perfect middle in this dark and brooding song.

Looking at the list of records from The Netherlands that I've reviewed in the past year, the list of records with the moniker good or better is getting quite long. Quality is going up all the time it seems. The question remains how can these bands break big, like the dance scene has broken big abroad? A record like I_con deserves to be heard anywhere.