You were the one that volunteered. Wooden Saints 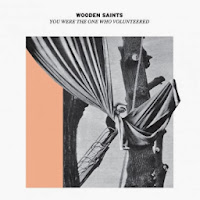 Recently I read a book by a Pakistani writer. Listening to the opening song of You were the one that volunteered I was remembered of a scene immediately, where someone is crashing to earth, all of a sudden realising that he forgot to do a final check and that this parachute, the one that is not opening, wasn't his own. His steel discipline forgotten for one second with fatal result. Hence this memory? The band sings: 'What if the parachute won't hold'. Not 100% the same starting point, definitely the same result.

Wooden saints released its second album last September, following debut album 'I know why your house is on fire' a little over a year. That is good pace if we take non-indie bands as a standard. The band at heart is a duo, Arjan de Bock and Victor van Woudenberg. Around that duo a whole collective of musicians is gathered who together create the full sound Wooden Saints builds over the length of You were the one .... Ten people in all make up Wooden Saints. The one most catching my ear is singer Tessa Douwstra. Her voice carries a large part of the songs, alternating with several male voices. Bee Gees antics are not something this band is afraid of. Voices shoot up into the highest registers at times without hesitation, without holding back.

Wooden Saints alternates between indie rock, ballads, beatlesque pop, some folkrock and light forms of psychedelia. Arrangements of the songs can be fairly light, where everything except the drums are embellishments filling up empty spaces. Other songs are richly dressed up with many instruments. 'Lion on a leash' has both. The song ends with reminiscences of Jefferson Airplane's best songs, with Balin-Slick-Kantner style harmonising. The many different approaches do make me ask who Wooden Saints really is, but as long as the quality of the songs is consistent, this does not seem like a problem to me.

If I have to write something critical about You were the one ... it is that several songs are not very original and that some songs could have used something extra. A bite, something that makes them stand out just a little more. On the other hand Wooden Saints dares to go an extra mile as in 'We've been discovered' with the trombone solo or an interesting soft rock song as 'She cuts the highs'. Intricate vocal melodies intertwine when the band sings the song home.

The same intricate musicianship is displayed in 'Alpha Bravo Charlie Disco'. Guitars and copper play a delicate game together, not unlike Belgian band TMGS does on its magnificent Rivers & coastlines: The ride. Frank van Kasteren's lets his guitar really rip in the background. This is not the main style of Wooden Saints. Although You were the one ... has its exuberant moments, living with the brake on is more of a motto for the album. In some songs the band cuts that better than in others. 'Daydreamer' e.g. is just to duff for me, while 'We love the night' succeeds totally.

As a whole You were the one that volunteered does not convince me, on an individual level most songs do. That may sound a bit illogical, but this is what I derive at, having listened to the album several times under different circumstances. Wooden Saints has potential but hasn't arrived yet where it may go in the future. And that is meant as stimulus, as I believe the band has a lot of potential.