No Song, No Spell, No Madrigal. The Apartments (2) 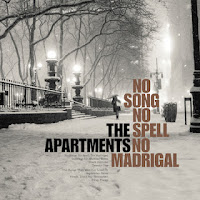 'Tinseltown In The Rain'. I heard the song for the first time in years recently and now I'm listening to No Song, No Spell, No Madrigal for the first time and The Blue Nile just does not want to leave my head. There is something in the class of this album that brings forward this dark 80s song; that I never even truly liked. The class is underscored by the cover art. A beautiful picture showing a timeless setting. Only the way the lady under the umbrella is dressed will give a way something. The rest can be anytime between the invention of electrical light and now. A mystical photograph because of the combination of electric light, the snow and dark or perhaps the extreme greyness of a snowy, winter's day.

The Apartments in an Australian band from Brisbane that started 40 years ago this year. Off and on the band around Peter Milton Walsh played and recorded. In 2015 the band produced this album, released by the French independent label Microcultures that recently released that other beautiful album ' Dreameater' by French artist Garciaphone. I was made aware of the existence of No Song, No Spell, No Madrigal by the review of Erwin Zijleman on this blog (read on here: http://wonomagazine.blogspot.nl/2016/07/no-song-no-spell-no-madrigal-apartments.html?m=0) based on a, already sold out, Dutch release. It was only before Christmas I started listening to it and knew I wanted to write my own review as well.

So this is a band that is around for 40 years with a very modest output. Perhaps everything culminated into this one effort. And what an effort it is. The jazzy pop atmosphere of the album is not of this time and age. Everything spells artists like Black, Sade, the already mentioned The Blue Nile, Talk Talk and other almost forgotten heroes of the mid 80s who played songs with a strong jazz influences and managed to score hits for a fairly short period of time.

What strikes me first listening to No Song, No Spell, No Madrigal with a headset on is how lush the album sounds. The level of fine details the musicians have put into the songs and the fine orchestrations that accompany the songs. There is so much atmosphere put into the songs, it sounds very much like a fairyland the listener is invited to enter. Walsh is far from afraid to let the listener dwell on his own thoughts, to let his mind wonder off to pastures full of relaxation and pleasant dreams. The music is strong enough to let the listener go there and pull him back in to enjoy this music even more.

If The Apartments gets direct, it is with a bass like Air used for its breakthrough album 'Moon Safari', as in 'The House That We Once Lived In'. Only to be replaced by a lush electric guitar and a more direct one. Walsh sings over it with his somewhat hesitating voice. Not young, not old, just very serious with a dreamlike quality. For me this is a song in which all the fine points of the whole album come together. A song to dream to, to meditate to, to listen to ever so intently, but above all a song to tremendously enjoy.

I may seem to suggest that The Apartments sound like the 80s, it is far from the whole picture. For that the production is too 2010s. There is no album of the era with its, then new, recording studios with an endless number of tracks, where artists like Bryan Ferry utterly got lost in, sounding like this album. And that recorded for a small independent record company from Australia and New Zealand in 2015. For that it is simply too spacious, organic in sound and too true to life itself. It is easy to imagine The Apartments playing here in my home. Just by closing my eyes.

French critics voted No Song, No Spell, No Madrigal their album of 2015, as first Australian album ever. I will not go so far (in hindsight). What is easy to underscore is that The Apartments have released a fine album, with several beautiful songs on it. Nothing revolutionary, yet so fine. Every lover of the better kind of pop song ought to get a copy of this album and a further release in this country might just be called for.

You can listen to and order the album here: