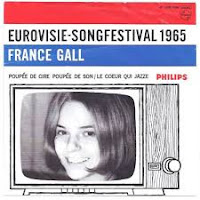 A post on two people who may never have met, although it is possible they shared a French TV studio once or something like it. Both died this weekend at the age of 70 respectively 74.

If I hadn't heard the story before I would never have heard that song, which isn't very good anyway. Her great hit in this country is and will forever be 'Poupée de Cire, Poupée De Son'. I liked it as a small boy, my aunt had the single 45. I liked it in the 80s when it featured in many a party as a 60s dance tune and I like it to this day. In the mid 80s France Gall's, who's real first name was Isabelle, career took a new turn with two minor hits (here in NL) called 'Il Jouait Le Piano Debout' and the formidable 'Ella Elle L'a', a song that, also, can be heard regularly on the radio to this day.

Reading more on Wikipedia I realise I know a fourth song. My aunt must have had two singles by France Gall, because I remember 'Sacré Charlemagne' distinctly, but where did that little record go?

Perhaps it is time to check up some more on France Gall. There might be a revelation or two there. 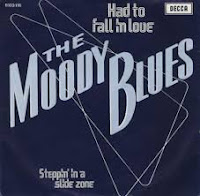 Ray Thomas was the flute player and other woodwind and copper instruments of (The) Moody Blues. Someone in the background of first Danny Laine and later the two singers: John Lodge and Justin Hayward. By the time France Gall's career was in a second run, The Moody Blues' was just about over in the mid 80s. Although not too long ago they played several nights in a row in one of the largest venues in NL, for me the band was a thing of the past. As it was for Ray Thomas, who quit the band in 2002.

Moody Blues is a band with a fine line of hitsingles. Starting with 'Go Now' in 1965 right up to 'Voices' and "Gemini Dream' in 1981. Of course The Moody Blues will forever be remembered for one song: 'Nights In White Satin'. One of the most beautiful ballads ever written. Apparently the flute in the song ironically came out of a mellotron.

On Monday morning they played 'Question' on the radio. I found that I liked it even more than I remembered it, having not heard the song for several years; if not more. The quiet section was so much more forceful, so right. Where I used to only see it as a hindrance to that powerful rocksong it also is. It is no surprise then that in the past I had 'Ride My See Saw' and 'I'm Just A Singer In A Rock And Roll Band' as favourites. I had taped the albums from a friend in the dorm I used to live in in my university years, but never really liked them beyond 'Days Of Future Passed'. Perhaps it is time for a reappraisal, liking 'Question' so much more today.

Ray Thomas wrote a great song on the album 'Long Distance Voyager' from 1981, an album I did like straight away: "Veteran Cosmic Rocker'. The kind of symphonic rocksong where hearing is believing and yes, I liked it alright.

I'm going to end my little post on Ray Thomas and Moody Blues with that other beautiful ballad the band released in 1978 on its comeback album. 'Had To Fall In Love' is so touching. All British reticence and not showing emotions while they are bursting through the seems of that stiff upper lip that keeps singing with this low voice, subdued and keeping up appearances. What a song!