In Search Of The Lost Chord. Moody Blues 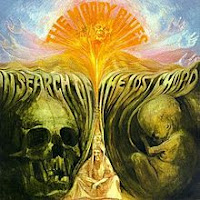 Years ago Wo. started a series of reviews on albums he had never heard from bands scoring hits in the year that he discovered Radio Veronica's Top 40. The years before he could afford anything but one or two single 45s a year. This led to introductions to the music of bands and singers like Chicago Transit Authority, Barry Ryan, Donovan, Golden Earrings, etc. Some of them were revelations, others far from. The series had come to a bit of an end with reviews of albums that he had bought since. With the recent death of Ray Thomas another album, that he has heard long ago, came to mind. The one containing the late 1968 hit single 'Ride My See-Saw'.

I am very sure that I knew 'Nights In White Satin' before 'Ride My See-Saw', but how can one be certain almost 50 years after that fact. What I do know is that I started listening to the radio in earnest in the early fall of 1968 after I learned there were things like hits and 'Ride My See-Saw' was in that list and an exciting song at that.

As I wrote recently in a little piece remembering France Gall and Ray Thomas I copied all the Moody Blues album from 1968 to 1972 from a friend, but found them to not really like them. I was happy with the few singles I owned and with 'Days of Future Passed'. We are 30 years plus down the road, so let's see if a reappraisal is in order. (As an aside, the pace in which this band released records...)

On the very first listening session I notice that something must have been wrong with my 20 something ears at the time. In Search Of The Lost Chord is an extremely varied album filled with some fine compositions ranging from psychedelic outings, LSD infused, fine ballads to a great rock song like 'Ride My See-Saw', one of two singles released from this album, although the first single, 'Voices In The Sky', never was a hit over here. The second thing I notice is the number of voices Moody Blues had. It was not just John Lodge and Justin Hayward leading the band, far from. Except for drummer Graeme Edge, all sang lead (Edge does narration of his poems though) and wrote songs solo or together. Ray Thomas and Mike Pinder were full contributors to the band's sound, just not their most famous songs. Within the whole it is clear that they were full members with a specific voice, together making up Moody Blues.

Released in July 1968, just months after 'Days Of Future Passed', In Search Of The Lost Chord' is another extremely well worked out album with so many layers and instruments. This time around all played by the band itself. Wikipedia counts up to 33 instruments used on the album. It is an album that rides the wave of psychedelia just after it started crashing down. The Beatles and The Stones led the way towards a more rock oriented future. The Kinks remained who they had always been and The Who was slowly working its way from a singles band to the rockopera monster it was soon to become. Moody Blues had found its voice as well and moved towards the symphonic rock field as one of the early adaptors. The sound of this album still had the 60s psychedelia and Indian sounds in it. The basics were all there for a career that would lead them to being one of the bigger subtop bands of the late 60s and early 70s, and to remain popular to this day.

A small fun fact around the album is the b-side of 'Ride My See-Saw', 'A Simple Life'. I do not have the single in my possession (yet), so have not been able to lay the connection. The Four Tops, one of the great Tamla Motown vocal groups scored a hit with the song in 1970. Listening to it for the first time on Spotify parts of the Four Tops hit are instantly recognisable. Moody Blues as songwriters for others? Why not. The song fits the Tamla Motown sound perfectly.

In Search Of The Lost Chord starts with a poem, which was normal for Moody Blues at the time, written by drummer Graeme Edge. Brought in a Napoleon XIV kind of way by growing into madness slowly but surely. The madcap laughter morphs into the opening riff of 'Ride My See-Saw' one of the two John Lodge rock hits for Moody Blues. The other one being 'I'm Just A Singer in Rock And Roll Band'. Yes, two of my favourites. The song has a strong rock riff or two, so many different sounding voices, going over the edge and all, and a strong soulful element, creating an irresistible mix that just lurches forward and forward like a train under full steam.

The album starts to surprise me from the moment the unknown (to me) 'Dr. Livingstone, I Presume' is played. Again so much happens within one song in the singing and the instruments used and the way the song develops itself. The voices and the approach do sound familiar to me as I have heard Moody Blues one way or another through the years. It is my ears and brain that seem to have changed and making me appreciate the music so much more. And, who wrote this song? Ray Thomas.

'House Of Four Doors, Part 1' is a mini symphony including a radio suspense show with all creaking doors stuff. The band was not afraid to stop the beautiful music to create a totally different atmosphere adding something to the album that perhaps should not be there. It becomes more than a song without hindering the flow of the whole. A very fine balance the band strikes here.

"Timothy Leary is dead", 'Legend Of A Mind' starts, "No, no, no, no, he's outside looking in", it continuous. The mind is explored, the inside of it that is. Like the lyrics of the whole album is about exploration. Through physical travels, synthetic drug use and transcendental meditation. The lost chord of the lost word isn't 'om' for nothing. It is Ray Thomas who wrote this most spacy of tracks on In Search Of The Lost Chord. In everything a signature Moody Blues sound.

So here I am going to correct myself. Was I wrong writing that Ray Thomas was one of the men in the background of Moody Blues. Despite being the flautist and tambourine player, Ray Thomas made a huge part of what the Moody Blues sound is for me. And for Wikipedia writing Ray Thomas quit Moody Blues in 2002? I just saw a video from 2015 where he is singing his heart out to the single mentioned here several times. So, here you go, ignorance even happens to people who seem to know a lot of and about music.

The quality of In Search Of The Lost Chord remains at this incredibly high level. I will not go into each and every song. Instead what I am going to do is go to the record shop now and see if I can find a nice second hand copy to start playing the record for real, instead of on Spotify.

As Gary, with whom I have e-mail conversations regularly that find their way to this pages, wrote on me discovering this album: "sometimes it takes someone to die before we truly appreciate them". Very true, Gary.

Finally, take one look at the cover art of this album. Very special, isn't it?

You can listen to 'Ride My See-Saw' here: