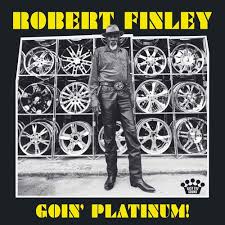 Having listened to Goin' Platinum! once, my first reaction is: Let's not over do it, people. Yes, this is fine record, with well-valued production duties of Dan Auerbach, who does everything to make the dark, tainted, southern soul voice of Robert Finley shine in a bunch of songs sounding authentic. The story around Finley is the kind to allow for empathy and sympathy for things gone wrong in his life. My cynical side says "remember Seasick Steve?"

When I put everything surrounding this release aside, and that is the only possible way to listen to Goin' Platinum! with the ears and mind it deserves, I can only write this album isn't half bad at first listen. But what happens after that?

I notice that the opening song starts with a guitar riff reminding me of Fleetwood Mac's 'The Chain' and a vocal melody that could have been one by The Black Keys. The elementary blues scheme it follows is soothingly familiar, the differences surprisingly fresh. Finley's voice is doing everything that is promised. It sounds rough, well worn out and used, like a favourite leather coat that only feels better with the years of wearing, no matter the looks. 'Medicine Woman' has the same sort of excitement.

It is with the third song I am starting to have some doubts. 'If You Forget My Love' goes back a long time in sound and feel. All the way to Otis, who is dead for over 50 years this month, Wilson Pickett and other soul singers of the 60s with rough voices that could touch the heart of listeners none the same. Now I do not know what sort of music Finley played in his army days and beyond, before he quit music. It could have been anything of the day to entertain people and make some money on the side. Listening deeper into Goin' Platinum!' I get a stronger feeling that the materiel is selected/written to make Finley sound as authentic as possible, without me knowing whether he is. (Yes, I am the bit cynic here, I'm afraid.) Now hardly any authentic voices remain, the world is in need of one. And here is Robert Finley -and Dan Auerbach filling in the details for him.

Alright, I'll admit to never having been a real fan of soul. It certainly has its moments, but not for a long time as far as I'm concerned. The same goes for 'Goin' Platinum!'. The album has its moments. The mix of blues and soul works well, but in the end, not unlike Auerbach's recent solo album it never really comes alive somehow. Despite the fact these musicians all seems to be playing fine, it just doesn't sparkle, while I'm left with the feeling the materiel on the album could have allowed for it.

So, having gone up and down the album a few times, I'm sort of stuck in the middle. On the one hand I can understand the hullabaloo because of Finley's authentic, yet much-missed vocal (style). On the other I have heard so much better in the past. So does the missing of those from the past allow for all the present joy? That is for you to find out and decide upon. Good luck, as this is just me writing.

You can listen to 'Medicine Woman' here: