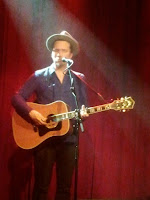 The mystery of the announced and then disappeared support act apart it became a perfect evening in the Patronaat Café. One microphone, some smoke twirling through the spotlights, a faded Persian rug and a guitar case that was about all to be seen on the small stage of Patronaat Café. It turned out that it was more than enough for Shane Alexander to enrapture the assembled crowd. His voice, his guitarplaying and stories. All together they make up songs that soothe mind and soul.

Touring behind his new record 'Bliss', that was reviewed on these pages in a very favourable way this summer, Alexander had a few surprises up his sleeve. Next to playing several songs from his new album and a few older ones, he went back to the albums that were around his father's house, which all turned to be out his mother's. I'll won't divulge more of the story, because he would like you to hear it for the first time to, just like I did. (There were more stories on origins of songs which tell a lot about where inspirations for songs come from. From talking about a thought with a co-writer to memories of things past.)

Now I always find that playing a cover, certainly a very famous world wide hit song, is a dangerous thing for a lesser known artist, touring with his own originals. The covered song usually overshadows the rest of the show. Being of a level that the aspiring artist may never reach. Hearing these songs from my early youth, the kind of songs that are somehow ingrained in my brain, make all the words come out in one single flow. Not even because I play them every day now, they are just there. In this spot where memories originate. So, yes, I was happily singing along. Except to that one cover by Tim Krekel. Yes, I could sing parts of it, but never realised that 'Angel's Share' was a cover. It took me a while to realise that I had heard the name Tim Krekel once before: at a Shane Alexander show and then forgot. Time to dig into some new music. 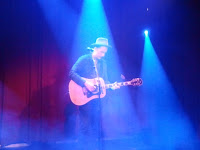 Three thoughts came to my mind on the covers. The first one was a negative one. I did not come to hear you play these songs, Shane. That was replaced by the thought, go ahead, I'm seeing and hearing the love with which you render them to us. This is very much o.k. The third thought is the biggest compliment I can give. I noticed that his own songs fit these world famous ones easily and that the words to several of them flowed nearly as easily from my mouth. Very softly, so not to disturb my neighbours with my singing. The volume was pleasantly low, all listened to the intimate show, the sound was perfect.

Being an artist is hard work. A touring schedule tells you that. It is also good to notice that there are people helping a touring artist like Shane Alexander. People pick him up to sleep at their house, they drive him around to or after a show. Making it all possible. For the rest there are trains and buses and people along the way to get to the right venue in time. 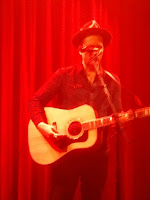 What I also like to share with you how proud he is of the sleeve of 'Bliss', designed by Alan Forbes. Now that I have the LP in my hands I know exactly why. It is the perfect sleeve for this title. One look suffices to see it all.

What is left to tell you about is the music itself, but those of you who follow this blog know my thoughts on Shane Alexander's music. It's just beautiful. Let these words suffice. Go out and listen for yourself. He'll be back in 2017.

You can listen to and buy 'Bliss' and his other five albums here on Bandcamp: