For Those Who Need The Blues. Giles Robson 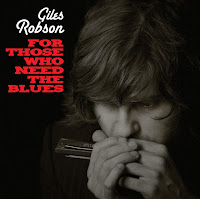 It's been a while since I listened to a new, dirty sounding blues album like the one from Giles Robson that was released recently. Live the likes of Guy Forsyth still pass my way every once in a while, but an album? That may well be in the 90's. Coincidentally the demo's of Mick Jagger with The Red Devils came by in the car this week. That band is the direct reference I'm going to use here, as Giles Robson's harmonica is as devilish as Lester Butler's was, the band behind him as cool and hard playing like The Red Devils. Only 'The Kid' is missing to challenge Robson as hard as Butler was challenged by the extremely cool guitar playing of Paul "The Kid" Size.

Do I need a lot of words for For Those Who Need The Blues? No, of course not. This is boogie wonderland land as far as I'm concerned. The real stuff. And, not that I want to take anything away from Robson's lyrics, they might be straight poems, but to be frank here, who cares. This is about the stomp to the floor rhythms, the crass playing, the harshness of the electric blues as it is meant to be played. Giles Robson and his band take care of that to perfection.

The Dirty Aces are no more, or at least not with its frontman. Robson has gone solo and the world will undoubtedly find out as for music like this there is always a market. I was lucky enough to have seen Leiden's finest Bimbo Box Blues Band play with its wizzard harmonica player and its fabulous guitarist Frank van Veen in the 90s. They only did covers, but rock and rolled each joint they were playing. Giles Robson brings back these memories and more as the rest of his band is better. Frank van Veen, where ever he may be, would cut a nice figure as his lead guitarist though. In such a challenge the way forward towards just this little more diversity lies that is lacking on this record.

For the rest, world. This is one extremely fine blues (rock) album. It's sweaty, damp, moist, stomping. It's the dripping off the walls kind of blues. Each show by this band must be a party to be present at. If you like electric blues, this is your album in 2016.

You can listen to the album trailer here: