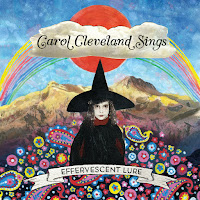 In early summer I reviewed 'Wishing Well', the EP by the duo with the comical name Carol Cleveland Sings. In response an album was announced that was released some weeks ago. Time for a review.

I have to admit that at first listen I was struck by the combination of lightness and seeming shallowness of the music. I did not really believe my ears and I'm glad that I did not. This is an album that is chockfull of little pop gems. Indeed full of bubbling, sizzling pop songs that have lured me to listen more and more.

As soon as I listened better I heard the pure pop that is hidden beneath the lightness with which these songs cloak themselves. The moment that the instruments behind the electronic fizzles present themselves. That the album is not so electronically dominant as I seemed to think somehow at that first listen session. To realise how much is going on behind it all.

Carol Cleveland Sings is Thomas Hughes who called in Gretchen Lohse to help finalise his songs. This lo-fi bedroom project of self-proclaimed psychedelic post-pop goes back to another century to find its bearings and inspiration. Some songs seem to come straight from the Brian Wilson - Van Dyke Parks songbook. Where psychedelia has unhinged minds to near madness, without the owner of the mind noticing. Hence he keeps doing what he's good at: writing popsongs. Songs that receive a twist or two because of the state of mind. 'The Painting's Moved Again' is the final song on Effervescent Lure. I bet it never moved, but don't expect the writer of the song to believe me. Everything in the song moves, turns, twists, in effervescent ways. The feat is that it never twists out of control. Thomas Hughes knows exactly what he's doing here to maximum effect.

It is the opening song with its simple drummachine and Casio sounds that put me on the wrong track straight away. Listen again and it is clear that this is an extremely catchy song. The chorus has a catchy hook and the rhythm just keeps going and going. It spells pop in capitals. After I tapped into my second and third thoughts (thank you, Terry Pratchett), I can declare it an ideal album opener.

Effervescent Lure touches on many influences. The Beatles is a major one and then specifically its psychedelic outings of whirling sounds. Another is the lower-fi quality of Sparklehorse's early days. The way that band could subdue a song comes through here as well. Psychedelia of the 60s in general comes by of course. Finally I'd mention pop bands of all ages. Bands that are able to write a good song, that is extremely pleasant to listen to. That quality is all over this album.

The mix in lead singing, male - female, works well here. Gretchen Lohse's higher voice creates an instantly different atmosphere than Thomas Hughes' slightly nasal singing. Just like her harmonies enliven songs in the right places. Those little oohs and aahs in 'Below The Basement'! The guitar solo in the mostly electronic song is another high light of this album. It does not take any imagination to hear The New Pornographers play and sing this song.

The up right pop of 'Below The Basement' detonates with 'Crimson Colored Mantel' and '(Someone) Like A Wolf' that come before and after. The first being a girl pop ballad, slow and solemn, the latter a waltz like song, serious and darkish. A George Harrison like song. Right after the synth goes off lightly again in the melancholy title song of the EP, 'Wishing Well'.

Carol Cleveland Sings plays with moods in superb ways. Nothing is what it seems on this album. As listener I may catch a vibe once into a song, but within minutes or less I'm forced into something else again. That gives Effervescent Lure a playfulness that forces me to set my bearings straight with each consecutive song. An album that still surprised after several listening sessions. An album of extreme interest. And all this followed from my first impression, that wasn't quite positive.

Efferverscent Lure is an album to discover and to submerge into. Those who do, will find a treasure trove of fizzling, sparkling pop music that lightens your day.

You can listen to and buy Effervescent Lure here: