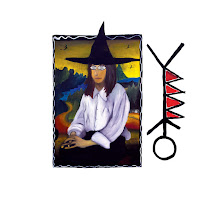 Scott & Charlene's Wedding? What kind of a bandname is that? It seriously made me doubt whether I should listen to this album. Prejudice is seldom the harbinger of good advice, so I decided to listen to the album anyway. A world of indie or alternative rock opened itself with deep dives into the darker side of 60s rock in combination with some punky attitudes. A combination that, despite that bandname, sits quite well with me.

SACW, as they write about themselves, is from Melbourne, Victoria in Australia. Mid Thirties Singles Scene is the band's third full length album, my first. So there's nothing to compare this album to, SACW internal of course. There is one name that pops up the whole album long: The Velvet Underground. There's just no escaping the band it seems. The way the guitar is played, the chord progressions, the way of singing, it's all there. It is that more uptempo part of the band exclusively. In SACW John Cale is not in sight, and then 'Delivered' starts, I give you that. Neither are the ballads, yes, 'Forever And A Day', but this is like an afterthought at the end of the album. It's the 'I'm Waiting For My Man', 'Beginning To See The Light' and 'What Goes On' side of The Velvet Underground that is recreated here.

At the same time the VU could never have played what SACW is playing. That was the punk revolution of 1977. The attack is simply harder and the singing more relaxed than the haunted, speed-fueled singing of Lou Reed in his harshest rocksongs. Craig Dermody stands far more relaxed in life it seems, which creates the right sort of distance. The music only comes into my comfort zone when I want it to and not as a bulldozer of speed fuelled frenzy, kicking me in the teeth, pulling my brain out with a straw, stamp on it and then ask whether I liked it.

Mid Thirties Singles Scene starts with 'Maureen'. The song is a hybrid of VU intent and a punk chorus of just 'Mau-mau-mau-Maureen". Bitten off, chewed upon and spat out, the delivery is so hostile, confrontational. Fountains of Wayne does the same trick with the same name but the end result can't be more different. It does set the (mid thirties) scene. As long as the listener doesn't expect any consolation from this music, he may be alright. At least for a while.


The elemental instrumentation delivers the exact right background for the sneering delivery of the lyrics. Drums, a strong, often melodic, bass, a dry sounding rhythm guitar keeping time with an accent here and there and finally a lead guitar, dirty like a polluted, muddy river. The four instruments are well-balanced in the mix, so that each player has a part to play in Scott & Charlene's Wedding that is attributable within an instant. It's possible that an organ enters the mix, but not in a confrontational way.

I just read about The Velvet Underground, again, and how the band was more or less rejected by each and everyone in 1966, even before its first album was released in 1967. Partly because of the confrontational attitude and lyrics of the band in combination with the uncompromising relentless drones in the music and partly because it was seen as just a backdrop for Andy Warhol's extravaganza. The more surprising it is that 50 years later its influence is so huge on a lot of musicians who could have been grandchildren of the VU's members. Surpassing anything Lou Reed did in the rest of his career.

Scott & Charlene's Wedding have taken the attitude of 'The Velvet Underground & Nico' and combined it with the melodic power of 'Loaded'. It created its own set of songs and surprised the world in 2016 that the power of this kind of music is still intact after all these years. Certainly not for everyone, but definitely for those who like some nice, barely controlled rock and roll of an alternative, 60s nature with a punky attitude thrown in for good measure.

You can listen to and buy Mid Thirties Singles Scene here: