Aligned With Juniper (2). Queen of the Meadow 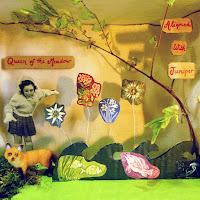 Again a thank you to Erwin Zijleman for this tip. I certainly do not always agree with his ears and thus his opinions on female singer-songwriters, but here he has found another gem that would otherwise totally have passed me by.

His tip had another effect on me as well. Misreading the title I started to sing "and Jupiter aligned with Mars". Hence the 'Hair' review, an album that fits my 1968 - 1969 albums series perfectly, that will be published within a couple of weeks on this blog.

Enough of the past. Fast forward to 2016 and Queen of the Meadow. This French duo, yes, you could have hit me dead and I would still not have heard, from Bordeaux has released a beautiful first album. Helen Ferguson, the name may betray the English accent in her singing, is now in her mid 30s but did not start playing guitar until her 27th. With each chord learned other songs started to appear. She now has recorded them with her erstwhile guitar teacher and now partner Julien Pras who produced Aligned With Juniper and plays most of the other instruments on the album. Pras has a whole list of bands and projects to his name.

The cover of Aligned With Juniper is colourful, eclectic, but look closer and you'll see that most colours are not bright, but sort of absorbed by the background. There's light but also shadows. Looking at it the cover detonated less with the music of Queen of the Meadow than I thought at first. Making music is serious business for Helen Ferguson. There's a blanket over the songs, a blanket that subdues the atmosphere. Helen Ferguson's voice is just about as subdued, if not monotonous in sound. Emotions are hidden somewhere behind a stern posture.

I take that as a given. From there decisions are made. Do I like what I'm hearing? Is this music worthwhile investing time and attention into? Does Helen Ferguson write good songs? Then the answer can only be yes. Right in the beginning of the album Queen of the Meadow draws me in with 'Caleb'. This lighter, yet melancholy song sets the atmosphere for the whole of Aligned With Juniper. The slow singing accompanied by an acoustic guitar is accented by a piano on the chorus, just like the harmony vocals by Helen Ferguson herself. The song invites listening, with a hint at English folk of decades if not centuries ago, who knows Middle Ages minstrels. The minimal accents put in place by Julien Pras contrast with the sober singing and guitar playing, so add a welcome layer to the stern song.

The only "strange" voice on Aligned With Juniper is U.S. folksinger Emily Jane White's. In 'The Bride' she provides the harmonies. The good thing is that it does not alter the mood of the album. She worked totally serving the good cause.

One influence I notice is Lou Doillon's. 'The Portrait' could have been a track on her latest album, 'Lay Low'. A track with drums and a lightweight band setting. The whole track is flashed out much more than the first two songs. The singing is less dreampop like, very direct for Queen of the Meadow. The song puts itself in front of the others, is good, but also made me aware during the early listen sessions that I had to pay more attention to the less obvious, work just a little bit harder.

This led to the opening to the core of beauty in Aligned With Juniper. My take on the music went from liking it it true appreciation. I found it to be of importance to listen beyond what was just obvious, like it's important to ignore the brownish backdrop in the cover. Queen of the Meadow presents a few layers in its music to discover. It starts with the layers in the singing, different in sound and melody, intricate. There's the basic accompaniment on acoustic guitar and then the inventive accompaniment around the basis. Notice for example how a few dark piano notes alter the mood of 'Old Captain'. The songs with a band setting are different again and finally there is an option to discover influences that are woven deep into the fabric of the album's songs.

Looking at Aligned With Juniper from this angle, Queen of the Meadow takes its listener on a musical trip that surprised at many a corner in its songs. What at first seems a pretty straightforward folk album turns into adventure that leads to several musical discoveries. Something is added with each session. Not just beautiful but interesting as well. I'm glad I took my time with this album.

You can listen to 'The Bride' here: