Perceptions EP. All Comes Down 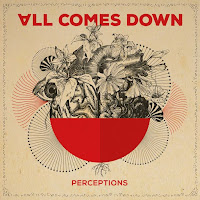 In the deep winter of this year my heart was warmed by the performance and songs of All Comes Down. They played a support gig to a Belgian band I have nearly forgotten the existence of. My review of the gig at this point in 2015 is the best read on this blog. (Click here to learn more: http://wonomagazine.blogspot.nl/2015/02/all-comes-down-live-gebr-de-nobel.html) After the show singer Zjantal told me about the upcoming EP and finally it is here. Of course it's always the million dollar question whether a completely surprising support gig translates into a good or even better album on record. Let's get into that in a moment.

On the other hand, why wait? Does All Comes Down deliver? Hell, yes! It does and makes its point from the very first song to the last note on this five song EP. What surprises me most is that the band manages to capture the energy it shows on stage on record. Perceptions is a fiery storm that rides through the skull once allowed in. "Feel the fire burning inside"?, Zjantal Ypma sings and yes I can feel it burning inside her.

The funny or strange thing, depending how you look at it, is that I'm not one for this sort of music. Let's call it the Within Temptation sound, but as I'm not a connoisseur here, I could be wrong. Zjantal's voice doesn't have this almost opera sound. She tries at times, but does not have that quality. At the same time it seems that is one of the reasons I like All Comes Down. The same goes for the guitar sound. This remains down to earth as well. A good rocking sound and not atmospheric high flying delays or such. Guitarist Erik Fridzema does not beat around the bush. His playing is straight forward, while able to play in quite a few different ways, creating different atmospheres and textures to a (part of a) song. An overdub or two, three, four? Erik Fridzema definitely took his time to get his parts right and created all these little fun moments that enrich the sound and music of All Comes Down.

Another feature I like is the hard, but dry pounding sound of drummer Peter Robbemond. The foundation he provides the band is filling and a luxury to have. At times he is on his own planet it seems, to come back in the right place to drive the song forward relentlessly. Let me take 'Tidal Wave' as example. There are these tight parts where the band goes full out as one and other moments where more complex rhythms are played and the band seems to bounce off of one another. Great song. (Sorry, bass player, as always I do not have much to say. I just don't have an ear for basses it seems.)

The influences of All comes Down come from several sources in hard rock. Soundgarden's somewhat disconcerting chords can be heard in 'Idiosyncrasy'. While in another way the music is a somewhat louder, but less symphonic version of Earth & Fire. Pearl Jam is in there as well. This way a mix of sounds is created that does give All Comes Down the beginning of an own sound. The dreamlike begin of 'On the Edge' changes into the louder rest of the song. It shows the band can play with moods in a successful way. 'On the Edge' is well placed in the middle of the EP. A point of rest. The hardrock version of a ballad succeeds in providing this rest while not taking the pace out of Perceptions. In other words totally convincing. There's no surprise when 'Agony' burst loose, the hardest rocking song on the EP. And over all this is this feeling of pop, of melody, of harmony. The combination of these elements is what makes listening to All Comes Down such a pleasure. There's only five songs, not even released at the point of writing and I can't wait to hear more.

The only way is up was a horrible song some decades ago. The title is still fitting for All Comes Down. The band surprised me on stage. More importantly All Comes Down convinces on record. It rocks hard, knows when to back off as to give a song the room to breath and finds a good melody to lay over all else going on. Finally it has a couple of fine musicians who are truly complementary to each other and allow the room for the other to excel. Above all there's this fine singer in front. A voice of some proportion. All Comes Down should be a band to watch soon.

The cd presentation show is on Thursday 17 September in Gebr. De Nobel in Leiden.

You can listen to 'Tidal Wave' here: