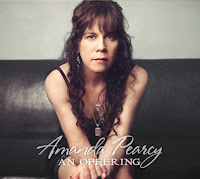 There is exactly one album that I could sort of follow the progress of when it was in the making: this one. Being in contact with Amanda Pearcy while trying to arrange an interview for this blog (read here: http://wonomagazine.blogspot.nl/2015/05/interview-with-amanda-pearcy.html), I was aware when she was sitting at a kitchen table in her spare time writing these songs. I knew when she was about to start recording and of all the hardships around being able to record. I have to admit that having followed these steps from thousands of miles away, heightened my anticipation but also my expectations when I received an email saying: "here is my new album".

Having met Amanda at a show in Q-Bus, Leiden in April 2014 that impressed me, the album, 'Royal Street' (reviews can be found on this blog), that I bought afterwards impressed me even more. In other words: An Offering has a legacy to step into.

The first listen blew me away instantly. An Offering has an atmosphere of a too hot, extremely humid evening, in which everyone is too mellow to bother about more than moving an arm to pick up a cold, cold beer can. The music makes you forget the rest. After that first introduction I found it extremely difficult to place An Offering in front of 'Royal Street'. When I think of a song of Amanda Pearcy, it is a song of that album that pops up and not An Offering. The fate of any new album after one that made a huge impression.

In my past reviews I already sang the praises of Amanda Pearcy's voice. That quality springs to the front immediately on her new album. That southern drawl in combination with a voice that lived life, does it for me. I'll say it again, Amanda Pearcy impresses me more than Lucinda Williams, it's time the rest of the world notices this quality too.

Musically the album is obviously played by a couple of very proficient musicians. Reading the booklet it becomes clear that several musicians never played together, at least when recording for this record. The recording took place in several locations as soon as something like a duet or additional solo had to be recorded. Something which is completely normal of course.

Tim Lorsch is, again, responsible for the overall sound of An Offering. Which makes the album sound familiar for Amanda Pearcy fans. The sound is warm, caring and at times all enveloping. A sound to get lost in, without having to worry about finding your way back. The music takes you along just nicely. What amazes me, is that the basic tracks were recorded in one weekend. With the additions in the months after. How can a band sound so tight in let's say 20 hours of recording?

Again Amanda Pearcy takes us along past the ghosts of past and present, but also offers comfort to the soul of man. She does so in rockers, in country tearjerkers and everything in between. Her voice suits all forms the music takes. To get myself off the hook, I'll call it country, but this music has nothing of the candy gloss I usually associate with things coming from Nashville. This lady from Texas does things in a different way. Her music is down to earth and thus totally alive. An Offering will grow on me and already does.

The third time around and after that I am starting to appreciate An Offering as much as I do 'Royal Street'. A real feat which I did not expect. I tip my hat in admiration, Amanda. This offering was accepted in kind appreciation.

Amanda Pearcy is touring The Netherlands (Belgium and Germany), mostly with Betty Soo, in October. See her website for more details:

You can buy An Offering at Bolcom: