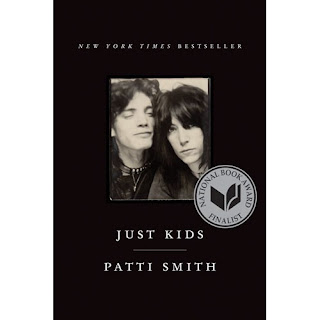 Somewhere I read that the book will be filmed as a tv series. Why not? Its spans the years in New York City that said goodbye to Andy Warhol and worked its way into the 70s gay and disco scene on the one hand and the punk/new wave scene on the other. As a good a topic as any and with two icons at the center as its heroes. Many legendary persons walk into and out of Patti Smith’s recollections of the time she lived and worked with Robert Mapplethorpe before the world had heard of either of them.

Patti Smith entered my life somewhere late 1975 or early 1976 when her album ‘Horses’ entered the album charts. Man, did I hate it. Absolutely nothing for me. I was waiting to hear another song from ‘Wish You Were Here’ or ‘Desire’. ‘A Night at the Opera’. And here was this bunch of noise from a woman who clearly could not sing. Things change in life. Taste change for music as well as food or art for that matter.


I can’t remember where I was exposed to Robert Mapplethorpe’s pictures for the first time. I think it was in New York in the fall of 1992. What I remember, is staring in horror at some of the pictures of people in the most extreme positions, in situations beyond what ever I could have imagined myself. While at the same time being fascinated by the beauty of the picture itself. With a picture of the man himself, by then already dead, as the devil incarnated. Shock, horror, beauty, art. No other artist ever came close to creating all these contrasting feelings, thoughts and emotions inside of me.


In Just Kids Patti Smith recreates the world in NYC in the late sixties and the early seventies. A period when Mapplethorpe couldn’t wait to get recognized, went far over the edge to chase his ambitions, where Patti supported and loved him when he needed it and he provided shelter for and loved her in his own way. Two uncertain young person trying to keep themselves alive in a big city that doesn’t care. Until that point in time that some of the people they meet do start to care as they recognize something in the drive and talent both have. People in influential places that were able to change matters a little for them that provided them with the next step up the stairs.


What strikes me is that large sections in the book have nothing to do with singing or music. Patti Smith tried to be an artist and a poet. Worked in a bookshop. The music came later. At the time she started to perform with her poems, she brought a guitarist. The one that is still at her side in 2015, Lenny Kaye.


There are a few little mistakes in the book, when a reference is made to a song or record when it wasn’t released yet, but who cares. It is about the feeling that is expressed with the reference. What is striking, is that years before either Mapplethorpe or she became famous, they meet all these famous person. Janis Joplin, Jimi Hendrix? They have small roles in Just Kids. (Beat) poets, the Warhol entourage, Sam Sheppard, musicians? All there. The Velvet Underground playing in Max’s Kansas City? Patti is present as she frequents the place regularly and knows the right people. Signs that both are moving up in the world, start getting noticed, before the rest of the world does so. It is that which fascinates me in the book. We get an insight into the years of hard work and being dirt poor at times living in places without warm water or bad heating. And bad food, most of the time. And Patti barely drinks, doesn't do drugs, at least in the pages covering the first 26 years of her life, doesn't smoke (idem) and is a law abiding, religiously raised young woman, who sometimes imagines doing bad things like kicking in a window and looting the store. Everything I had not expected from the wild image or perhaps better wild look of those years soon to come.


For the rest. What to think of a woman who lives with a man who loves other men? I decided not to judge. They loved each other. Each in his/her own way and made a pledge to not leave each other until they both could and had made it. It got them there and both followed their own path. For the one it all ended too soon, the other is till on stage and performs her breakthrough album to celebrate its 40th birthday.


At times the references to people are a bit too much, some descriptions too arty or only possible to write with the wisdom of hindsight, but in the end it’s all alright. Just Kids gives an insight that is extremely interesting and fascinating into the lives of two successful artists before that time on the rise to where they would be in some years. Through dedication and hardship with some hard work thrown in there. The acclaim for the book is well deserved.

And musically? Things became quite alright between Patti Smith and I. With 'Wave' as my absolute favorite album. Let me make a promise here. I'll review 'Horses' later this year in honour of the 40 year celebration. And as I still haven't seen her live, perhaps it's time to do so.

You can buy Just Kids on Bol.com