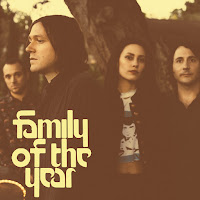 'Family of the Year' is one of those albums that come out each year of which I think at first listen: 'Do I have room for another album like this in the sparse time I have to listen to albums, new and especially old'? I honestly did not know whether I wanted to invest time in 'Family of the Year'. It just sounded too familiar, beating the well trodden paths yet again. Even the cover reminds me of one of The Magic Numbers' album covers. After having listened it through once, I put it aside, but found that this little spark was left behind which made me come back. The result? My opinion of 'Family if the Year' swung in the right direction and made me invest in the album any way.

“It’s an L.A. album, we recorded in Berlin, about the Vineyard,” is what lead singer/guitarist Joe Keefe comments on the band's new album and Vineyard being Martha's Vineyard on the north east coast of the U.S. To my surprise Family of the Year is not a new band. After self-released 'Songbook' (2011) the band released 'Loma Vista' in 2012, which is the home of an international hitsingle called 'Home'. A hitsingle? And even in my home country as well, according to Wikipedia? I had something to check out and moved over to You Tube straight away, to find a video having been watched more than 18 million times. The song doesn't strike any memories though, except that it faintly reminds me of other hits around 2012 and 2013 in the new folk segment. Fingerpicking, harmonies and some faint hints at 60s psychedelia. The electric guitar in the background hints at there being more than folk. Let that element be the strong part of 'Family of the Year' that draws me into the album.

The influences of 'Home' are recognisable. It is one of the elements that makes up the sound of FotY. This band is great at creating a mood that brings the listener to a meadow on a sunny day, straw hat to cover the eyes, a piece of grass in the corner of the mouth and just lazing on that sunny afternoon. What FotY is not afraid of is throw in a cloud or two. And it is that part of this band's music that sets it apart from what the thousands of other bands in this genre play. The kick drum is there, the finger picking, the sweet sounding harmonies and then real drums kick in and a dark sounding guitar. "The grass is a whole lot greener on the other side", they sing sweetly together, underscoring that it is not so green where they moved to or were in the first place, accented by the drums and guitar who have just joined the sound. An extremely nice detail in an otherwise beautiful song where nothing seems to be happening just before that moment.

Sebastian and Joe Keefe were joined by Christina Schroeter and James Buckey and together they started creating songs in 2009. Six years down the line, there is a band that convinces and can come up with songs that make a difference in this genre which is on its way out for some time. By spicing its songs up with an indie rock guitar and drums Family of the Year may just have a chance a survival beyond the hype of new folk.

Joe Keefe's voice is one of these sweet sounding, highish male voices devoid of urgency. With that comes that I have to be in the mood to listen to him. Christina Schroeter's harmony is complementary, so there is never a contrast. In general the sweetness wins over the spicy bits and that makes 'Family of the Year' an album without danger and experiment. 'The Dance' sung by Schroeter does have this bite in the change it has within it, again preceded by the drums kicking in. A variation that is very welcome and exactly that moment was the spark that brought me back to 'Family of the Year' in the first place.

The album softly wraps up with the more moody 'Hey Kid'. Also a song which is different from the more softly upbeat songs that make up the large part of 'Family of the Year'. The band doesn't make it difficult for the listener to access its new album. Beyond that observation 'Family of the Year' offers some great melodies, nice harmonies and holds that nice surprises here and there: sweetness with some spicy chunks thrown in. Enough for me to write 'Family of the Year' is an album to like.

You can listen to 'Make You Mine' here: