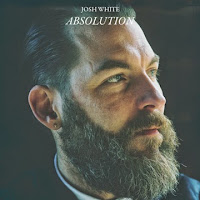 So what am I looking at in this picture? A hipster or a 19th century pastor? The beard is flecked with grey, which suggest the latter, although a beard ages a man easily.

Noisetrade does a flick on people every once in a while. Looking through the singer-songwriter section I download some new music, to try it out on my iPod. Listening to the title song of Absolution, I was gripped instantly by a mighty voice and the intricate interplay of two acoustic guitars and a piano. 'Absolution' is a beautiful song, totally inspired and not giving much away, at least not knowing what is about to come. Absolution is a totally religious album. The Lord is praised the whole of the way and Jesus loved and in hindsight Absolution is about becoming friends with the Lord. All the lyrics have nothing to do with worldly love, worldly friendship, it's all about that place high up in the sky.

And me and the Lord? As I read coincidentally tonight before writing: "The only one who knows for certain whether God exists, is God himself"* and that says it all as far as I'm concerned. I sort of get terribly ickey listening to some of the lyrics of Josh White. At the same time his songs are great. The reference with Crowded House is well deserved. Some of his songs hold up to Neil Finn's work. The music is singer-songwriter after all.

Absolution isn't "a real album" in the sense of a new album by Josh White. It is a release of work he has released in the past ten years under different names and now re-released under his own name. And you can find it for free on Noisetrade, just follow the link below.

Listening to 'Absolution', the song, I was swept away by the power of Josh White's voice. So self-assured, a virtual rock. I entered the album directly into the to do list of this blog and then I heard all the Jesus and Lord lyrics and forgot about it fast. Despite that I came back to the album at a later stage and decided to challenge myself. So here you are reading the second review of a religious album on this blog. (The first was another Noisetrade release, James Thrasher's Life of Seas' EP: http://wonomagazine.blogspot.nl/2014/05/life-of-seas-ep-james-thrasher.html) And why not? If you are able to set yourself over some of the lyrics, at least if you are not into religious singer-songwriters that is, you will be exposed to beauty. I manage to do that every once in a while and hear these beautifully crafted songs, with subtle interplay. Some based on a guitar, others on piano, but all containing that great voice.

Josh White deserves to be heard and would have been a well-known singer-songwriter if he had sung "Laurie or Betty, I love you" instead of "Jezus, I love you, please forgive". And who knows he is a famous songwriter in his own circle. It is always a fascinating thing how people all take different corners in life. As long as one's happy, it's alright.

* From 'The truth about the Harry Quebert affair' by Joël Dicker
Gepost door Wo. op 16:32