The soul of all natural things. Linda Perhacs 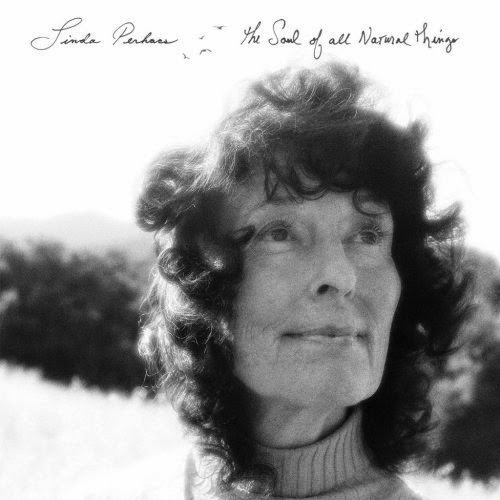 And now for something completely different, to quote the catch phrase of some up start British comedians in the late 60s, that will be doing something the completely the same quite soon in London. The quote is appropriate as Linda Perhacs released her previous, and only, album till now in the heyday of Monty Python's Flying Circus and in 2014 has come up with a new album. It is also appropriate as I do not often review albums that come from a new age sort of musical background. Still I am writing right now, so something must be good.

Listening to the album I would have given Linda Perhacs an English background, but I found out she is from the U.S. The pastoral atmosphere had me completely fooled. A soundtrack to France's queen Marie Antoinette playing the little shepherdess with her courtesans in the back garden of Versailles The soul of all natural things could have been. Instead  The soul of all natural things is a new release on the Asthematic Kitty Records label of which some releases have featured before on this blog.

Linda Perhacs released her first, and as said, only, album in 1970. It was called 'Parallelograms' in 1970. According to Wikipedia it has to be put into the corner of the psychedelic folk. I haven't heard the album yet, but will before I publish this post. The album was hardly noticed in 1970, but gained fame under collectors and was re-released twice in the 00s. In the second half of the previous decade this led to Perhacs singing on a few songs of modern psychfolk acts like Devandra Banhardt. This information makes the release of a new album not so strange as it may at first look. Also the fact that another collector's favorite Vashti Bunyan traveled the same route before can be taken into account. The album was recorded in 2012 and 2013 under two producers, Fernando Perdomo and Chris Price.

All this does not say anything about the quality of The soul of all natural things, although some hints have been given. The album has nothing to do with the whole psychedelic movement active today. Linda Perhacs has been given the chance to shine in an environment that is a temple of unhasting. The comment I made on new age is not so far beside the point. Putting on The soul of all natural things allows for several moments of total relaxation. It may even be possible to meditate on most songs. 'Prisms of glass' is this intricate song of languorous sounds and Perhacs' voice that intertwines with itself singing different lines through and around themselves, with Gregorian like chants behind them, creating an intricate game of lyrics and singing. The mood comes close to what Enya did in the 80s on a song like 'Orinoco flow'.

Other songs come a little closer to Suzanne Vega. 'Immunity' e.g. is more rhythm based and one of the wilder songs on The soul of all natural things. Wilder only by comparison that is. Strangely enough in some songs I hear the influence of Steely Dan as well. A completely stripped down version of Steely Dan, but the influence is there in the way a song like 'Daybreak' is approached. Jazzy and meticulously played and arranged, but with a minimum of effects. Most of the album is produced in a way that makes the music sound full with a minimum of instruments. Chanting voices and atmospheric sounds are broadly allocated in the mix, with notes of an acoustic guitar and some voices come into the foreground. 'Freely'  is another winner on this album. A song in which everything seems to fall into its right place.

For those who want to give the album a chance, the opening and title track is all you have to try. If this speaks to you it is worthwhile to proceed. If it doesn't there is hardly any need to listen to other songs. 'The soul of all natural things' is a beautiful track that tells all about what is coming next. It has several elements of Enya Celtic folk, new age instrumentation and a pastoral quietness that has all but disappeared in modern society. The soothing voice of Linda Perhacs, that despite that she must be 60 something, has something of a young woman in it. The sort of song to close my eyes on and dream away. That is the effect The soul of all natural things has on me. Not an album for all moments, but certainly the album for that sort of moments. Linda Perhacs has produced an album that is more than welcome at those moments.

Also beware. Someone decided that we need preaching to also towards the end of the album. By that time I'm in the forgiving mood. What needs to be heard, needs to be heard in the final minutes.

You can listen to 'The soul of all natural things' here.
Gepost door Wo. op 17:37