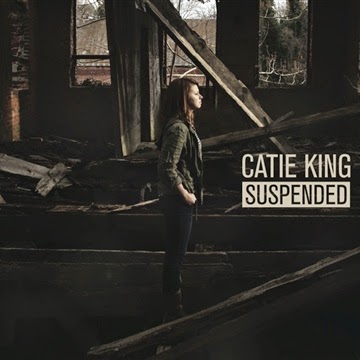 Recently I reviewed James Thrasher's excellent EP 'Life of seas' that I found on Noisetrade and promised to pay some more attention to music I found on the website. This new instalment is on the EP called Suspended by Catie King. Another set of music that is very much worthwhile to check out. Catie King presents her six song collection with a lot of confidence. Ranging from fierce U.S. kind of rockers, to contemplative singer-songwriter, King gets away with it all.

Catie King is a musician from Raleigh in North Carolina who wears 'her heart on a sleeve" as she writes herself. She debuted with 'Catch and release' in 2010, followed by Suspended in 2013. On Suspended the music is straightforward. Catie King gives you what you hear. No surprises, rock that sometimes creeps toward boy pop bands, but leaves that thin line just in time. This kind of rock goes back for over 30 years in the U.S. and sounds very familiar. It's Catie King's voice that I particularly like in the songs. It's like Alanah Miles in 'Black velvet' or Pat Benatar in 'Love is a battlefield'. A wall of guitar sound with strong rhythmic support or the laid back rock of Bruce Hornsby. It can all be found on Suspended.

Where things get surprising is in the third song. 'Come what may' is a slow singer-songwriter, contemplative song that shows that Catie King is more than a rock chick with an 80s inclination. Leonard Cohen like guitar picking is coupled to a song of love and dedication. The song changes into a rock ballad later on. This only makes the impact higher. 'Come what may' is a beautiful song. 'One day at a time' goes even a bit deeper, with some country overtones and all.

Suspended starts with a muted acoustic guitar. 'Lay you down' is the correct song to open Suspended as it is the hybrid between what is on offer. There are clear rock sounds, but the tempo is low and leaves enough room for beautiful interplay between the lead guitar and keyboards, with over that Catie King's voice. A voice that is deep for a woman, with volume and depth that can be combined with passion and subtle emotions. A winner in other words.

The rock winner is the title song. 'Suspended' has it all. Great melody, great lead guitar, great vocals and a warm organ, pumping rhythm section. The sort of song we hear on the radio. So how does Catie King get herself on the radio?

Suspended is not my favourite EP from Noisetrade so far. That honour stays with Morgan Mecaskey's 'Righteous kind', but it settles quite nicely behind this EP. Another gem from Noisetrade in other words is let loose on the world.