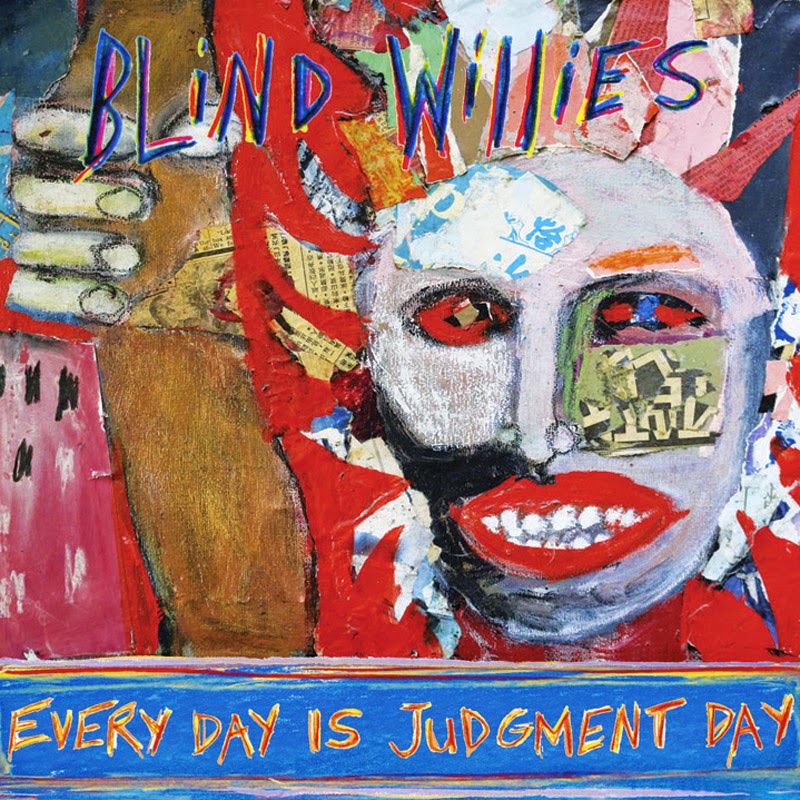 Last year the Blind Willies played on a bill with Glossy Jesus and TMGS at the Q-Bus in Leiden. Re-reading my review, the band rather left me behind in confusion what to make of its show. "From ecstasy to boredom within two songs and back", that sounds like quite a feat. Recently singer Alexey Wajchman reached out to us announcing Blind Willies' new album. Here's is our review.

Every day is judgement day is a fifteen song, 57 minutes long album preceded by the single 'Big city'. The video was shot mostly in Amsterdam. Because of that element the song reminded me a lot of 'Big city' by Dutch singer Tol Hansse, a major hit in 1978 in NL. Not so much musically, although both songs are not your everyday sort of pop song, and certainly not lyrically. Where Hansse wrote a comical song about people you could (and can) run into in a big city, Blind Willies is always serious. 'Big city' is one of the lighter songs on this album, with a few moments of extreme beauty and subtlety tucked in. The first band that comes to mind listening to Every day is judgement day is 16 Horsepower. Blind Willies also has this devil on my tail quality in this collection of songs. 'Dig a hole' is one of the best examples of this. The slide guitar, the rhythm and the trumpet make the song sound hounded. Steely Dan is another reference. Blind Willies is not afraid of putting some jazzy elements into its music. Listen to 'Potential bag' and you hear the more acoustic version of a song like 'Kid Charlemagne' or 'Any world (that I'm welcome to)'. And an observant listener can find three signature notes from there 'Goldfinger' as well.

The title song at heart is a blues, again like some of Steely Dan's songs are. It shows a blues can be played on a piano riff and a cello as well. 'Every day is judgement day' becomes convincing when Blind Willies shows its great use of dynamics in the song and not just because an electric guitar kicks in hard at one point (although I would not be surprise if its a violin through a distortion pedal).

Musically the band is hard to place. American folk rock is the name associated with the band, but listening to this album the music goes way beyond folk (rock). There is a faint hint of klezmer/eastern European music. In such there is a faint link to Gogol Bordello or Kaizers Orchestra and De Kift. There is some some straight rock infused into the mix, like there is some jazz and blues as already mentioned. It seems to me more a complete melting pot of influences an American artist is exposed to in the U.S., with the clear exception of rap, dance and pure country. For the rest a lot can be found in the music of Blind Willies. The band name is a homage to blues singers from the 1920s and 30s with "Blind" before their name. That gives away the foundation of all.

Blind Willies is around since 2007 as a duo, releasing two album since 2008. Since 2011 Blind Willies is a band consisting of Alexei Wajchman (voice and guitars), Misha Khalikulov (cello), Daniel Riera (flute, bass), Max Miller-Loran (keys, trumpet) and Alex Nash (drums). Every day is judgement day is the band's second album as well, making four in total under the name Blind Willies.

Every day is judgement day is an adventure of an album. Each song is a story with a lot of lyrics. In that sense I would not be surprised if Wajchman comes up with a novel in the future, like Richmond Fontaine's Willy Vlautin. The extremely cynical 'Cremo tango' is a shocker of a song. "Ladies and, gentlemen, this way for the gas" to a background of sunshine, tango's being played and a few people apparently having a good time as well. "42 Jews" continues in this vain, although more covert. Just a counting down number of oppressed people, death and "the righteous men". The lyrics are as intense as the music. A great song! Every day is judgement day does become lighter and more personal as well, somewhere down the album, but attests to past and present major wrongs in a strong, committed way and can be called a protest or political album.

Musically it is an adventure as well. Remembering the way I was swung back and forth that evening in Q-Bus Leiden, I'm rather surprised by the constant level of quality on Every day is judgement day. No matter how diverse the songs are from a musical perspective, all are good in their own way. A lot of different things happen and different sounds come by. From extremely subtle 'The possible world' to the more exuberant 'Big city' or the very intense '42 Jews', Blind Willies is able to give most of its songs a unique musical stamp. Warm organs, screeching or subtle strings, a fine piano or a raging electric guitar, all is possible on this album. 'Big city' is linked to below, which is kind of a shame, as it is not representative, in sound, not quality, for the rest of this album. So look up the rest yourself, as the album is released today.

One point of critique? If I'm forced to name one, it is that I would have been happy with a 12 song album. Every day is judgement day is a few songs too long to keep my full attention. 'Steal away' doesn't manage that when I'm nearly 50 minutes on the way. Perhaps also just a little too much Paul Simon solo to my taste? That is all, so I would not let myself be put off by this critique, dear reader. Every day is judgement day is an album that begs checking out.