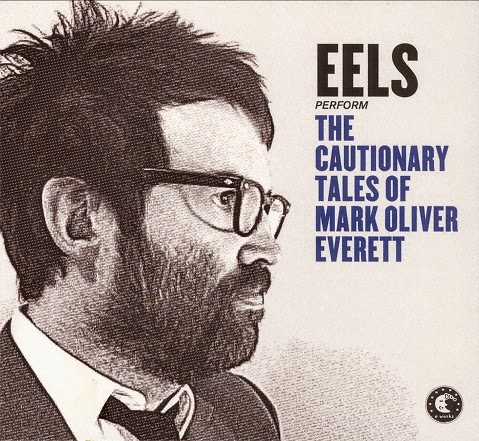 The man with the wild hair, wild beard and glasses that may have been his grandfather's is back with a new album. An album that everyone before me has said to be totally dark. Well, there is not a lot to laugh on The cautionary tales. That is for sure. Another something I noticed is that E is starting to become the Louis Armstrong of our day. His voice gets more gravelly by the album. Now I know from a first hand recollection that Armstrong could hardly talk beyond a whisper circa 1957. I don't think that is the case for a man called E.

The cautionary tales is a good album. That is the first statement to make, I think. Having listened to the album several times, it is easy to say so. The cautionary tales is in nothing like last year's 'Wonderful glorious', which was a much more exuberant album, with several good old rocking songs on it. All that exuberance has been thrown out of the studio for The cautionary tales. Most songs are stripped down to the bare minimum. Now there are a lot of violins on the album. That seems to contradict my stripping down statement, but doesn't if there isn't a lot more than a violin or some violins and concert bells or a xylophone or whatever it's called accompanying an acoustic guitar. There can also be a chamber orchestra setting. E sings over a nearly empty and very softly toned background. Sings about things that have gone wrong is his life or choices that preferably could/should have been made differently.

Thematically there's nothing new as this is not Eels' first bleak album. For some people the world is just blacker than others and we all have to try and get to the other side as good and well as possible.The cautionary tales actually starts of with a piece of instrumental chamber music, that oddly enough reminds me of a Kaizers Orchestra song, 'Mr. Kaizer, Hans Constanse og meg'. The mood set by 'Where I'm at', is simply continued throughout the whole album. E starts the album with "Woke up lost, in a world I didn't know". Still dreaming, an unknown bed or room or worse: total estrangement from life? Need I say more on the mood?

It is by listening more carefully that I noticed that not all is black here. There definitely are rays of light. The mandolin in 'Parallels' gives the song some lightness. Like the singing of E in 'Lockdown hurricane''. The song may be sung with resignation, but also with compassion and care. Something which is reflected in the warm sound of the electric piano, the cello and the chord changes. And someone who who is able to come up with such a level of warmth in his feelings and emotions is not totally despondent and focussed only on himself. These elements make 'Lockdown hurricane' a beautiful and warm song as well as a tremendous asset to The cautionary tales. Perhaps a strange thought, but I'm really wondering what this song would have sounded like in a version by Frank Sinatra. Not that I'm a particular fan, but a song like 'It was a very good year' comes to mind here.

Eels keeps up this level of songs easily. 'A swallow in the sun' is of such delicate beauty (the abrupt ending is the only minor point here). 'Series of misunderstandings' is another song that was stripped to the bone. A double tracked voice, concert bells and loads of atmosphere. It is at this point that I start to realise that The cautionary tale is not just any Eels album, but a very good one. My favourites so far were 'Beautiful freak', okay, okay, who doesn't?, and 'Wonderful, glorious'. The first and the next to last. The cautionary tale is settling itself between these two and the question is going to be where it will wind up.

So putting everything in perspective after listening to Eels' latest effort often and intensely, there's only one conclusion possible. Eels has come up with one of its best albums to date, with the potential to be my favourite Eels album. To my ears The cautionary tales of Mark Oliver Everett reaches down to a level that Eels had not reached before. Something called beauty, which wasn't there in his work in my opinion. A lot of other things, but not beauty.