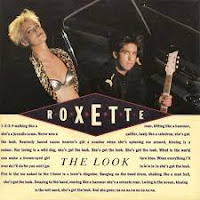 No, I have never been what one can call a fan of Roxette. For that the band was to poppy and too much 80s in sound. Not rock, not pop, what was Roxette really?

For me several of the singles of the band did add up to a guilty pleasure. The first single I got to know was 'The Look', something like 1988 I'd say. I just liked the firm sound of the very danceable song. Something that was important, as I at the time was the "musical director" of our student flat. Come a huge party, I'd be mixing cassette tapes for the whole evening. From 50s rock and roll songs, to 60s hit, 70s disco and hardrock to the latest hits in the 80s. 'The Look' certainly will have been one of those songs, to sing and dance to together with our friends.

So while the duo at such meant nothing to me, 'The Look' is a song to still enjoy in 2019 each time it comes by. After that I mostly remember semi ballads like 'It Must Have Been Love' or 'Listen To Your Heart'. As ballads were at the time, they had to be firm in sound, with strong, loud drumming and loads of tinkering keyboard/synths. It may be because of this amount of toughness that I can listen to them. They are not my favourite Roxette songs, but sort of alright, with 'It Must Have Been Love' as my personal favourite.

The second song by Roxette having true meaning to me is that other rocksong, 'Joyride'. A number 1 on the Top 40 in 1991. It has that same sort of toughness, 'The Look' has. This one being sung by Per Gassle. Looking in my singles collection I ran into 'Spending My Time', but do not have any recollection of the song at all, yet must have bought it at the time. (Not on hearing either.) 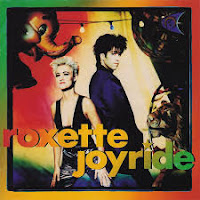 Only now I found that Roxette had been active off and on right up to a few years ago. I had no idea, but then this band had other fans than me.

A day after we heard that an acquaintance of us is going to die because of a brain tumour, the news that Marie Fredriksson had died from the same disease was made known. Although she was more a memory from a time long ago when life was extremely uncomplicated, with still so much more to learn, the news affected me. And not just because of the previous news.

What brings it closer, is that she is of the same generation as I am. A sign of my own mortality and all the things that can go wrong within a body. How lucky those being healthy are, and let me count myself in that group. Something to cherish and enjoy. Although a little older than I am, 61 is extremely young. There's still so much to do.

Roxette is no more, I suppose, but for me it was over after 'Joyride', 28 years old this year. So thank you, Marie and Per, for two great songs. Two songs I still love to hear when they come by somewhere and will always sing along to.