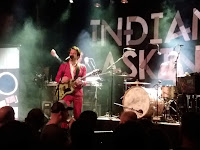 Indian Askin has been a part of this blog since before a formal record was out. So when the band played in the neighbourhood it was time to go once again. What I saw was a band in great form, what I heard a band that was tight and loose, miles away from what I first saw something like five years ago in The Hague as opener for De Staat.

Indian Askin is a band that is not 100% easy to digest. In its music there are always moments that confront or put the listener on the wrong footing. At the same time the band ought to score alternative hits, if only the charts, unlike in the days when I grew up, were not so one dimensional. Several songs have that quality of on hearing them become instantly unforgettable. That is a quality not all songwriters and bands possess.

The records are only one side of this band. Having seen them play at Bevrijdingspop after the release of its first record, I already was aware of this factor. Indian Askin sees its songs as a starting point from where to explore what else is possible with the framework it created at some point in the past. At Bevrijdingspop that was even more clear than now in Haarlem where I saw it for the first time headlining its own show. 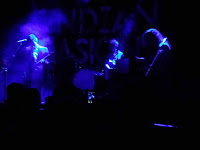 Working on rhythms, extreme breaks as in stop-start moments or just let the groove  play out and see where it takes them. Some songs were made very danceable and even more exciting than on record. The proficiency the four band members showed, betrayed the miles they have put behind them in the past years. Playing a lot makes a band better and Indian Askin only proves this.

In Chino Ayala the band has a front man who crosses Prince and Frank Zappa in some way. The dancing moves of Prince were missing but in his poses and moves Ayala gives the impression he could if he wanted to. Zappa is in the experimentation of the music and confrontation of the awkward texts directed at the audience. The band plays an important role as well. The support of De Staat back them was not so strange in hindsight. Indian Askin has a few similarities without copying at all. (It lies not in the music in fact.) What could make the band stronger though is one De Staat aspect: using the vocal strength of the other members just this little more. This would create a stronger contrast that is underused by say 5%.

For the rest, the filled small hall of Patronaat was conquered song by song. The show in that sense (also) was a triumph for Indian Askin. If all these people start telling their friends, the next step ought to be a well-filled main stage. The music, the show, the presence are all in place, so the light is on green. Step on it!

There was only one downside to the evening: Why wasn't there a physical copy of the new record? I would have bought it without a doubt.