All The Leaves Are Gone. Josephine Foster and the Supposed 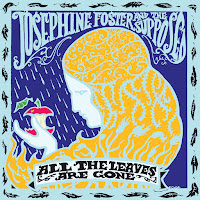 For those wanting to listen to this album after reading this review, it comes with a warning. The voice of Josephine Foster is not your everyday run of the mill female voice. There's no singing in the choir here. It joins traditional British folk singing with a shrillness that will not be for everyone. Those who persevere or simply like her singing find an album filled with music that experiments in ways with folk music that I can plainly state that it leaves the idiom behind for wilder climes.

Having to describe the music to make you understand a little more, at first I find having difficulty to do so. On the one hand the music a totally traditional. An acoustic guitar accompanies Ms. Foster's voice in a fully, to be expected way. Her quivering voice may meander off the beaten track a little but that is it. Until the accompaniment of The Supposed kicks in. Together they are able to completely derail the song or at a minimum take it into a totally different direction. Sometimes this happens at the very start of a song, like in 'Jailbird (Hero Of The Sorrow'). There's no holding back anything here. The Velvet Underground? Certainly I can hear traces of that late 60s band. It was also able to play beyond the limits of folk music (and so much more of course). In this song Josephine Foster and the Supposed go off onto at best semi-chartered inroads of alternative rock. With a large jangle injection this song rocks in the strangest of ways. By then the role guitarist Brian Goodman plays on both faces of this record will have been noticed by you. It seems he can do anything.

Usually a song starts straightforward only to surprise the listener later on. Unsuspecting listeners will even be caught off guard. Listen though and you will find the pearls. I love the way 'Worried And Sorry' changes with the frivolous guitar part, reminding of The Byrds. Musically this last band is somewhat of a reference, e,g, its psychedelic 'Eight Miles High'. I have the inclination to start singing without hearing it. It is the mood and experimentation Josephine Foster captures. It is here that I found the other hand: the experimenting within the structures of the song, until every boundary is lost.

It is surprises like these that won me over and start writing. (I faintly remembering switching the album off somewhere in the second song the first time I was listening.) Not to forget the surprise I felt when listening the second time.

Unlike recently with Kristin Hersh, this time I did open the accompanying information supplied by the record company. All The Leaves Are Gone is a re-release from 2004. To me it makes no difference as it is brand new, as an experience. And that this album is. Nothing happens like I would expect it to. The band isn't even from the U.K. but the U.S. As a whole it is an experience. One that I get to appreciate more and more delving deeper into the album and minding Josephine's Foster's voice less and less, in fact liking it more and more. It blends perfectly with the music she makes together with Brian Goodman and Rusty Petersen. Together they can lay low and cook up a storm. An exceptional record in many ways.

You can listen to and buy All The Leaves Are Gone here: