Let me introduce to you. A conversation

"It was 20 years ago today", was 1947. 1967, when that famous lyric was published, is now 52 years and a half ago today. Released on 1 June 1967, 'Sgt. Pepper's Lonely Hearts Club Band' was one of the most anticipated albums of its day. An album without singles and an extremely diverse set of music, asking a lot of the teenage fans and their mothers, aunties and grandmothers, who had all become fans in the years before. It is also the album that has made The Beatles what they are today, the most revered band on earth. Simply because everything we now know about pop music started with these four and their producer.

'Sgt. Peppers ...' has had enough attention two years ago when it was re-released. This week a short but nice little side line was brought up between Gary, Mark and Wo. shining a little light on a specific piece of history involving the title track of the famous album. It all started with a little message from Gary, that got two responses, but then Wo. thought of a logical link ...:

Let me introduce to you…… https://youtu.be/NHI6mmcr0zI 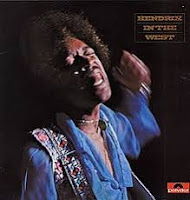 Wo., 16-12-19
The story is that Hendrix played the song at a show the day of or the day after the release of Sgt. Peppers in a venue in London, with at least Paul McCartney present. The track is found on a posthumously released record called 'Hendrix In The West'. An album a friend of mine had in 1974. Also my real introduction to Johnny Be Goode. Although I had heard Johnny Winter's version just before that. I still don't own Hendrix In The West. It went out of print years ago and second hand it comes quite dear.

It showed the showman Hendrix was even more than a recording artist. He could play anything, anywhere, like the artist he had been only until late in 1966 when he came to London thanks to Chas Chandler. Without that the world may never have heard of Hendrix and perhaps he had lived right up till today. Who knows?, to quote another of my favourite Hendrix tracks.

Mark, 16-12:
Can't add much to that. Here is an extract from an interview with Paul:

It would be one of his first gigs in London. Jimi was a sweetie, a very nice guy. I remember him opening at the Saville (Theatre) on a Sunday night, 4 June 1967. Brian Epstein used to rent it when it was usually dark on the Sunday. Jimi opened, the curtains flew back and he came walking forward, playing ‘Sgt. Pepper’, and it had only been released on the Thursday so that was like the ultimate compliment. It’s still obviously a shining memory for me, because I admired him so much anyway, he was so accomplished. To think that that album had meant so much to him as to actually do it by the Sunday night, three days after the release. He must have been so into it, because normally it might take a day for rehearsal and then you might wonder whether you’d put it in, but he just opened with it. It’s a pretty major compliment in anyone’s book. I put that down as one of the great honours of my career. I mean, I’m sure he wouldn’t have thought of it as an honour, I’m sure he thought it was the other way round, but to me that was like a great boost." (Quote from The Beatles Bible quoting 'Many Years From Now', Barry Miles)

The London music club scene was very vibrant at that time and was an important network for musicians to see and meet up with other musicians, look for opportunities to join bands, hear new people etc. Hendrix was living in London at that time and so he was a regular in the after hours clubs which The Beatles, Clapton and others went to. When you visit his flat on Brook Street in Mayfair on the west side of Regent Street they mention the times when George Harrison crashed out on Jimi's floor after doing the clubs. Paul and Ringo had first seen him back in January 1967 at the Bag O'Nails club which was in a side street between Carnaby Street and Regent Street. It was also where Paul met Linda for the first time by the way. Surprisingly Lennon was pretty much out of it at that time in his big house in Weybridge in London's "stockbroker belt." 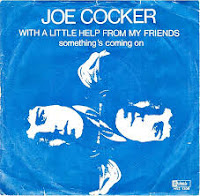 Come to think of it. There's another great cover version from the next song on the Sgt. Peppers album. I remember being so disappointed when I heard the original 'With A Little Help From My Friends' for the first time. For my 14th birthday I received the blue album, 1967-1970, having been given the red one, 1962-1966 for Saint Nicholas the month before. All the album tracks were totally new for me at the time and some of them so good. I noticed immediately that although all the big hits I knew well already, mostly from the red one, I liked the blue album much better. And still do.

In the fall of 1968 I discovered the Dutch Top 40, a list published each week on a piece of paper and played on Saturday afternoon between 14 and 16.00. With a friend I went out of my way back home from school to get it each Thursday afternoon at a local record store. Many of my favourite songs to this day were in the charts then. All of these little mini opera's as I call them now. Starting with 'Hey Jude' of course, but also 'Eloise' by Barry Ryan and 'Just A Little Bit Of Piece In My Heart' by Golden Earrings, yes with an 's' at the end at the time. Another of these huge songs was Joe Cocker's first hitsingle (over here at least) 'With A Little Help From My Friends'. A song so powerful, so all consuming, so extremely impressive to the near blank canvas my pre teen brain still was at the time. Even when I hear it today, I can't really conceive how anyone can dream up this version from, let's face it, a fairly dull kind of song and Ringo vehicle The Beatles' version is. I have come to appreciate it in its own right over the years for sure. Especially in the context of the whole album that I own since probably the late 70s or very early 80s at the latest.

That leaves the power of Joe Cocker and his band I might add, as Cocker always was more the singer than the musical director is my impression and for certain the accomplished singer of another one's songs. That power of imagination starts with the very intro on the organ, having nothing to do with the original melody, the forceful bass, the driving drums picking up the rhythm and finally the wailing guitar. That moment when everything falls away and the rasping voice of Cocker comes in followed later by the wailing ladies on background vocals, to culminate all in the primal scream of Joe Cocker himself. He never made a better song ever after, although 'When The Night Comes' comes close.

There are cover versions that simply obliterate the original version. Though I can only wonder what the true The Beatles fan felt, who already knew the original for over a year. Sacrilege? I can almost imagine it to be true. The Joe Cocker version became a big hit in its own right and still is.