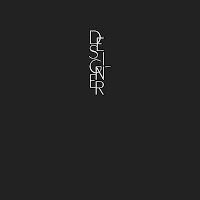 During the summer I hand over the blog to the posts of Erwin Zijleman, posting some of the albums that he tipped that remained on the shelf on my side, not his. One of the albums I posted in the summer was Designer by Aldous Harding. Recently I started listening to the album and I simply wanted to share my opinion on it to.

Her first album was reviewed by me, but I have to admit I hardly have any recollection of it. Her second album, 'Party', was far too dark for me. We did not get it on, so to say. The extreme darkness of this sleeve was not a come on as well.

That made that I was not overly interested in the release of Aldous Harding's third album. I can't remember really why that changed, but most likely because of year end lists that come by, where Designer found its way into.

So I listened and I have to say that the opening songs 'Fixture Picture' and title song 'Designer' tickled my fancy immediately. The two songs are not so much dark but an attractive sort of resignation. Later on in the album I am still sort of struggling with a few song as you will notice, making it hard to give a final judgement on the album.

The start is excellent. The timbre of Aldous Harding (I still want to write Huxley all the time, sorry) apart, the relaxed way of making music and the singing in parts of the album reminds me of Charlotte Gainsbourg. It has the same sort of everything will slide of me quality, a show must go on mentality no matter what. The voice of Ms. Harding is so much more flexible though. It is here that she scores some points with me as well. The light high voice is as easy for her as a darker aloof one. The contrast makes Designer quite attractive to listen to.

Designer in part is an album that does not need a lot to make an impression. The stroke of the strings, a little finger picking and a few elementary piano chords and notes is enough to create a beautiful song like 'Treasure'. A bare version of an The LVE song like 'Bags' 'Treasure' is.

Deep into the album I remain totally content. A modest band setting for 'The Barrel' gives Designer a nice boost. Again it is the vocal melody that steals the show. Aldous Harding is the show on her own album alright. She needs no power in her voice at all to impress me. This is an ideal album for when I feel tired, it keeps me in that not unpleasant state, while coming in at full speed without creating great exhilaration within me. The kind of album I used to play in bed in my parent's house just before going to sleep, on my first stereo and head set.

In the second half of the album the songs somehow change. They remind me of someone I can't think of the name of and Joni Mitchell. In a way a song like 'Damn' sounds a little forced to me as if Aldous Harding is trying too hard to belong vocally in this song. I am fully aware this is my perception but then that is what this post is about.

In the final song 'Pilot' Aldous Huxley totally loses me. Having found me again for the jazzy, Astrud Gilberto like 'Weight Of The Planets' and the song after it, the score is good. 'Pilot' has to do with the way she sings, just like in 'Damn'.

Be it as it may, the fact that I am contemplating buying Designer (correction, have) on vinyl does account for something, does it not. I can really imagine playing the album after breakfast, reading the newspaper before starting work or late in the evening with or without head phone. So who knows, fact is Designer has caught me in the past weeks. Better late than never.

You can listen to and buy Designer here: