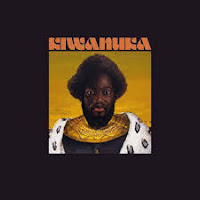 After several listening sessions I have still not made up my mind what to really make of Kiwanuka, the third album by Michael Kiwanuka. An album that is lauded all over the globe as one of the best of 2019. Although I certainly can understand why people are attracted to the music and the voice, I am left behind doubting the overall result.

Michael Kiwanuka came into my life with the release of his first album. A friend gave me a copy and I decided that this certainly was no music for me. So I never listened to album number 2. Some time back a track was played in a radio show focusing on album tracks that sounded sort of impressive. That made me try Kiwanuka some weeks ago.

The song that opens the album nearly turned me off immediately, sceptic as I started out. 'You Ain't The Problem' reminded me so much of totally obscure singer-songwriter Steve Waitt that I literally checked whether Spotify was playing the wrong album and that Waitt had released a new track.

This changed with the second song. But then comes 'I've Been Dazed'. No one can tell me that they are not reminded of 'Teardrop' by Massive Attack in this song. It has the vibe, the melody sort of. Of course 'I've Been Dazed' is a much more spacious song, making it impressive in its own right. As that it is, without a doubt. The kind of song that can truly touch someone, like 'Teardrop' did in its day. It is an impression that comes to me multiple times during the album: references that are laid on quite thick.

By this time I've gotten used that Michael Kiwanuka and Steve Waitt have the same sort of rasp in their voice. (Only when Kiwanuka sings in this way, as he has many timbres and depths in his voice.) So I have put that behind me. With the means behind him, he can achieve so much more than the NYC hotel pianist making a record in his spare time. The difference is huge. The soulful and jazzy 'Piano Joint (This Kind Of Love)' is an example of the way subtle mood and atmosphere mix with the lascivious strings, creating another of these beautiful songs on Kiwanuka. The kind of songs that definitely draw me towards it.

What it may come down to, is the following. Michael Kiwanuka's music, at least in part, is not my favourite kind of music. He comes close to things like The Commodores of 40 years back, yet manages to steer away from Lionel Ritchie and his colleagues in the right kind of ways. Mainly because there is a kind of darkness in his music as well. And this intrigues. At the same time darkness in music is not something I want to listen to all of the time. It comes down to me being in the right mood for Kiwanuka. Take 'Living In Denial', again Steve Waitt is very close. It starts sounding sort of happy without being so for even a second. It is extremely bittersweet. Just like 'Final Days' does.

So, where am I? I just don't know. I remain in a Kiwanuka limbo. There's enough to write about, not enough fully embrace it, nor to leave the album behind. It will take more time perhaps to truly learn to appreciate it. What I do know, is that Kiwanuka is worth the investment. It could well be an album for me after all.

And you, dear reader? Yes, you are not let off this easily. You have a little work cut out for you today as well. Go and make Steve Waitt some money by streaming his two albums, 'Blue Parade' and 'Stranger In A Stranger Land'.

There is a p.s. to this post. Thanks to checking up on Steve Waitt because of this I have just found he released a new album recently. Stay tuned.....