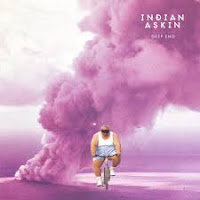 Recently I wrote on the full live show of Indian Askin I was present at in Haarlem. Today its the turn of the new six song mini album Deep End.

Indian Askin makes its music on an interesting intersection where rock, psychedelia, experiment, and a certain level of grossness come together and either of the ingredients can win out any time.

The firmness of rock is always present, simply because drummer Ferry Kunst likes to use his skins and cymbals any old time. That only says something of what goes on in the background (well, o.k. that background is debatable when pounding away like Kunst can). Over the drumming anything can happen. Chino Ayala has an inventive mind and is not afraid to show all the different things that go on in there.

So on the one hand there is an alternative hitsingle like 'Deep End' on Deep End, a song that is easy to sing along with, with a slap happy rhythm with a little The Cure like guitar work and semi-happy cavorting by the rest of the band. On the other there are darker pieces that are more experimental but even there it is impossible for the band to hide that it is able to write a good song. The reason why I was attracted to them in the first place with the release of the first EP a few years ago.

'Deep End' shows how much further the band is in its development. The time to please first, in an indie, alternative way, is over. This is Indian Askin in all its raw purity. In 'Baby' and the instrumental 'Psycho Mind' the power goes off and the songs drift in their own little world. There is nothing to prove at this point in time. Indian Askin is simply showing the world what it is capable of and this leads to a six song mini album adventure.

That Deep End ends rough and wild is just another side of the band. The melody is in there, again. Beginning the album again with 'Smiles' I notice the contrast with the subtle start of the album, but full of anticipation for the tumult to burst loose. The aggression is in the playing and the singing, a restlessness waiting to be released. And yes, loose it goes in 'Smiles'.

Deep End is a varied inventory and testimony of where Indian Askin stands late in 2019. Like the band showed live in Patronaat and here on record that place is one of extreme interest as the band is growing and growing. A step by step growth like De Staat managed over the past decade should be within reach. With a great record in about a year's time the next step should be guaranteed, if the stories about mayonnaise on stage are dropped. Not that I care, it was in a way quite amusing. A manifestation of the fourth element on the intersection.