The Rolling Thunder Revue. The movie 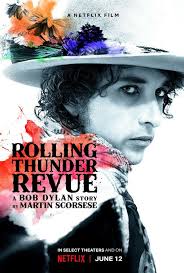 The Rolling Thunder Revue. Something I have heard about for decades. Listened to in the form of an average live album, 'Hard Rain' and listened to more recently through an issue in the 'The Bootleg Series'. Far more impressive than the 'Hard Rain' album. In 2019 Netflix released a Martin Scorsese movie and a 14 cd box is released, surprisingly not in the bootleg series, undoubtedly for a formidable price.

If I had not read about it somewhere, it would have seemed like a totally normal rockumentary. Interviewer asks several people involved about their experiences of the tour. And he found some interesting people as well. Sharon Stone, a Dutch director/camera man, speaking extremely accentless English as well. Hence we see 'Venus' by Shocking Blue come by in a Dylan movie. A promoter of the tour, etc. Yes, some weird things are said along the way, but who knows it were strange times, right? Perhaps the last true hippiefest. In 1975 nonetheless. The viewer sees Bob Dylan laughing, having fun and playing intense and from the looks of it good shows.

Dylan himself comes by as the sour looking older gentlemen he has become. Interviewed he talks about The Rolling Thunder Review and what he does and does not recollect. Commenting on the interviewed people. And a lot of it is a prank. Dylan plays along as do some others concerned. It is fascinating viewing still. Come to think of it, plays along? This is acting, these are actors nothing else, with Dylan playing himself.

The music is excellent. Everything I had read about the chaos and the looseness of the music is contradicted by the selected clips. Dylan sings in an extremely intense way, spitting out the words, almost shouting. Beautiful duets with Joan Baez come by. She's clearly still infatuated with the man she had loved over 10 years before. A scene with Joni Mitchell all playing a song by her, 'Coyote', in the house of Gordon Lightfoot who sits looking on in the background.

The tour must have been special for all those on board. Mick Ronson plays a loud lead guitar. Allegedly he had not spoken a word to Dylan on the tour. Perhaps not being in on the incrowd of U.S. folk musicians where all this once started with? You can hear him play a 'Ziggy Stardust' kind of exploding guitar solo on 'A Hard Rain's Gonna Fall'.

Where things get really weird is where Alan Ginsberg is reading poetry to a hall filled with middle-aged and elderly ladies. A poem about his mother. Seeing is believing. The context of this clip only becomes clear when later we see Dylan playing to the same group of mah jong or bingo playing ladies. The same goes for the meeting with native Americans where the band performs as well. In the meantime some sightseeing at Niagara Falls or driving through loads of snow in the north and in Canada are shown. There must be reels and reels of footage Scorsese could pick from.

What somehow surprises me, despite having read a lot about Dylan, is that he still wants to obfuscate history. Why not tell it like it was, instead of making up a whole story? Even at 77 or 78 he is still in the process of veiling who he is (and was). For what reason? But then all through the live shows he is behind a caked mask, so there is some continuation.

The movie ends with an overview of the shows the man played since the Rolling Thunder Review. Per year the list seems to get longer and longer. Dylan's life is on the road most of the time. The Never Ending Tour is inevitably getting closer to the end. It is not Dylan's will and perseverance that will bring about the end. (The people accompanying him are never at home as well. He must pay them really well to compensate.)

No matter how fascinating the mockumentary is, it is also clear that there is ton of footage of the Rolling Thunder Revue. A true concert film must be possible as well. That opportunity may still await us. For now I've enjoyed looking at the movie a lot.