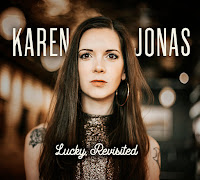 Karen Jonas revisits several of the tracks from her first three album and comes up with a stellar album, tighter than ever before. Lucky, Revisited is the result of years long touring with her guitarist Tim Bray and sometimes with an added rhythm section. What we hear on this new album is how her songs have developed on stage, without the (co-)producer near by. So all the niceties of her albums were laid by the wayside as they don't get to go along on tour. So no horns, strings, keyboards. Just an acoustic guitar, an electric guitar, bass and drums. And to top it all off, that voice I have come to love ever since I first heard it in 2011 with The Parlor Soldiers.

For me Karen Jonas foremost is that great, strong voice that carries every song. Even songs I do not really care for as they turn too country for my taste. Lucky for me she has mastered many different styles and moods. She surprised me with the swing on 'Butter', that came as a huge change in her sound and again added to her palette of musical colours.

Years ago I wrote that 'Oklahoma Lottery' deserved a statue. With the laidback version on this album I'd like to add that it deserves a spot in the central square of her hometown of Fredericksburg, Virginia. Everybody there and way beyond ought to hear this song and bring along the whole album as a trophy of musical prowess. Karen and her men are, again, in a great shape on Lucky, Revisited.

Tim Bray can show his fantastic guitar playing abundantly. He has taken chops from over sixty years of rock and roll and country guitar. James Burton, Cliff Gallup, Scotty Moore, you can find them all in his playing, and then some as the sound of today is in there as well.

A sober version of Bob Dylan's 'It Takes A Lot To Laugh, It Takes A Train To Cry' is on the album, despite not being revisited. Well, in a way, as a cover version it is also of course. Karen Jonas' version gets a melancholy tone that makes it another sort of song, that modestly competes with the original. The same sort of happens with the already mentioned 'Butter'. A totally sober song, despite all the straight whisky drinking in there. It allows Tim Bray to shine once again, now with his acoustic guitar. "You're going to love her", Karen Jonas sings and my best guess is that it's very true.

With Lucky, Revisited Karen Jonas does not present us new songs. In a way that is too bad of course as I was hoping for new songs over the past months. What she does presents is almost as good as new songs, as the songs are truly revisited and presented anew. So what is left to say are two things: first, again Karen Jonas releases a great album and secondly, when will she finally cross the pond so that her fans here in Europe and especially The Netherlands get the chance to listen to her live?

You can buy Lucky, Revisited here: