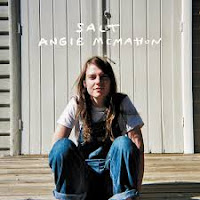 There's no need to beat around the bush here. Angie McMahon fits in the Barnett - Cloher category. Alternative songs with a guitar, somewhat misty singing, from Australia and instant pleasing not on the top of her list.

This is also where some comparisons stop. Angie McMahon to me seems like she is an old soul, the picture on the cover from somewhere in the past. Also she is not afraid to present herself as one girl, one electric guitar. The band, that is also present on Salt, seems to come as an afterthought in some of the songs. Great dynamics, like in 'Soon', is the result. The effect of the band joining in is tremendous and tremendously good. One of the reasons that I have endeared myself to Salt quite easily.

It does not come as a surprise that McMahon is from Australia, just like it isn't she's from Melbourne. Somehow this kind of music for women comes with the water. With Salt she presents herself to the world with her first full length album, having released a string of singles over the past year. Before going solo she played in a band called The Fabric. Now her mid 20s, she seems to truly have found her own voice.

In her singing there are hints of The Pretenders' Chrissie Hynde, in her music also hints at Angel Olson. When all that is said and done though, the strength of Angie McMahon comes forward. While progressing through her album it becomes clear each and every time that a strong singer and musician is going about her way

What strikes me perhaps most is the originality of Angie McMahon's music. It is extremely direct in its effect. She does not hide behind anything it seems. She doesn't do niceties in the form of a prefect diction or working with sandpaper to get it rid of any rough edges in her music. What I hear is what I get and it impresses me often. This is Angie McMahon in her bare, musical essence. The open look on the cover of this album shines through in the music,

What she does do extremely well, is underscoring points through the use of dynamics in her playing and singing or by using a band behind her, that seems to come in at all the right times. Salt gets these little extras where it already is an impressive album. Like the strength she can put into her voice or switch to delicate. With the inherent quality of most of the songs on Salt, the album becomes a winner, with an artist to watch out for in the future.

You can buy Salt here: