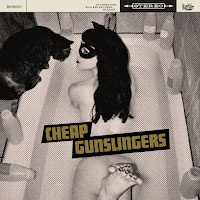 Musically Boston - Florida is for Rum Bar Records like turning the corner of the street. Cheap Gunslingers fit the bar perfectly. It's like Iggy Pop's younger brother kicks of the album to be replaced by four younger Ramones cousins, while a song or two later they all play together with the son of Stuart Morrison, Lou Reed's neighbour and the daughter of 'Mo' Tucker joining on drums.

Anyone listening to 'Three Chords' for the first time might just believe it. Cheap Gunslingers plays with history when writing and recording its songs. 'Run Girl' even brings in the early 60s. Traces of Dion and Del Shannon mix with the punk ethics that run through 'Cheap Gunslingers' foremost.

The three members obviously know their personal classics. Excitement comes first. Energy is jumping out of the whatevers of my MP3s. The pounding drums and driving bass goad the selection of songs ever forward. The rhythm guitar is deliciously murky or plain dirty. The singing is slightly distorted and sneeringly thrown into the microphone. Edo McGrady has the voice to match the music. Dirty, rough, without compromise, that's the way he shares his lyrics with the world. It's a tough world out there just so we know it.

If I have to compare Cheap Gunslingers to another act, I find that it is label mate Nat Freedberg I'm thinking of first, were it not that Cheap Gunslingers is far more rough and with almost no compromises. Of course, there're melodies. Abundantly even. What happens around these melodies is what makes this album so much fun to listen to. The pounding drums of Greg 'Johnny Zoom' Kazek keeps everyone's attention without any doubt. The rhythm just goes on and on, making sure there's no letting down for a single second. With full support of Todd "Killings" Johnson's bass. All McGrady has to do is play some nice guitar parts and sing to make Cheap Gunslingers happening and that is just what he delivers.

'Cheap Gunslingers' is an album for everybody who likes 60s pop infused with a jolt of garage rock and 70s melodic punk. In that category the album is a true winner and in several others easily as well. A great new album in the oeuvre of Rum Bar Records.

This album comes with a p.s. In 2017 one band member went missing. Melissa DuCasse is missing since. If anyone has information the band asks to contact them.

You can buy Cheap Gunslingers here: