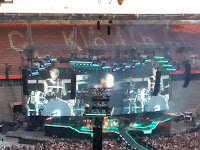 And so it came to pass that I travelled to another country to see one of the biggest bands on the globe for the first time. Somehow it had never happened. Wrong place, wrong time, sold out, whatever. Muse came to Cologne and I was there to hear them and undergo the gigantic show accompanying the music in the stadium that once, before the super commercialism of football (soccer) was called the Münningdorfer Stadion of the local 1. FC Köln.

With temperatures in the mid 30s and on stage probably a lot higher, it must have been hard work for the band and the dozen or so dancers that went about their business in many ways.

If you are a Muse fan, you know the music is great, that this band is fantastic. I would be telling you nothing new. So let me share a few things I noticed or stood out, so write an alternative kind of review.

The beer was tapped into custom made Muse hard plastic glasses. For a €2 deposit we had a great memento to this show. Of course Gaffen Kölsch, the omnipresent beer in Köln.

Four young lads walked in, wearing self created t-shirts with one letter each on the back. I noticed instantly they were walking in the wrong order and later saw they were sitting in the same, wrong order spelling M-E-S-U. Nice of them to share their support for the FC Utrecht player who broke his spine on the training pitch and is paralysed for life. 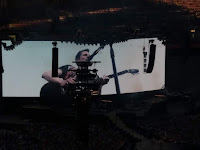 Although the average age may have been under 40, Muse attracts all ages. I noticed some 70 plus people and real kids and whole families or young girls totally enraptured. For a band that plays rather loud, sometimes over the top rock, that surprised me somewhat, but then I and my girlfriend were there too.

I was looking at a band that is playing stadiums with a host of extremely strong songs, I could sing along to easily. So what would they have pulled in Cologne? 30.000 people? And in France, in Italy, Spain, etc., etc. Yes this band has not had a single hitsingle in the Netherlands. I can't tell for other countries. That is extremely strange as bands that are so popular score huge hits. (When I was younger, that is.) So something in the system of the top 40 nowadays is totally rigged. As not so long ago the charts were much more diverse. So what is going on here? Not that I really care, I find my way with new music and have left the charts behind years ago, but still. Seems unfair to me.

Checking my idea above here, I am proven wrong. In fact they have been in the charts, at #40 or 33 and once on #12. But no big hit and not recently, while the band only has gotten bigger. It must have to do with airplay then. For albums it is a different matter. All from 'Black Holes And Revelations' have reached the number 1 or 2 position. 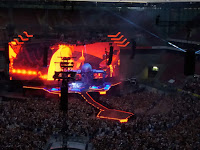 The Simulation Theory Tour 2019 was built around songs of 'Drones' and 'Simulation Theory', Muse's last two albums. For a band now 20 plus years under way that is a feat. It means the fans (still) totally accept new music by the band. Yes, I would have been very disappointed had I not heard 'Plug In Baby' and especially 'Knights Of Cydonia', a song that deserves to become the 'A Stairway To Heaven' or 'Bohemian Rhapsody' of the coming decades, but would not have wanted to miss many of the songs on the last two albums. As they are really, truly good and two of the better albums of the 10s.

I had one fear. In the house Muse can be overwhelming. The music certainly cannot be played under all circumstances and sometimes simply is too much of a good thing. Would that happen with Muse? The same, different o.k., boredom I have with every single U2 record, came out fully during the 2005 show I went to. Not with Muse. It only got better and better in Cologne. The darker it got, the better the show became.

That is perhaps the only critique possible. This show was made for darkness and not the light of a full summer evening at 20.30. The small podium remained a small podium far away. The result being that I was not pulled into the world of the future Muse tried to pull me into. They remained tiny things happening far away from my seat. The cause of the great sound in the stadium, the stack of speakers hanging from the roof, also took away part of the screen, so I did not have a full view of the video and live recordings. The darker it got though, the better the show became. Not the music, that was from the very first note simply fantastic. 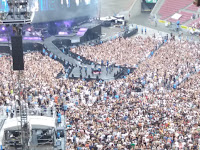 A minor compliment. The mix of the band's music was not good in the first song. Too much drums. Come the second song that was gone and a great balance was found. Don't ask me why they can't do this in the ArenA in Amsterdam, here it was all good and simply not too loud. Somehow perfect. Because of this set up my view was not 100%, the music perfectly alright.

The next day walking around the Altstadt of Cologne Muse was still all present. Usually I go home immediately after the show and don't notice the effect of a large show in a city. Muse t-shirts were everywhere. Old people, young people, people walking with their luggage to the train station. I decided circa 10 years ago I have enough t-shirts to last me a lifetime, otherwise I would have gladly joined them.

This brings me to my last observation. What lucky I am to live in a small country like The Netherlands. I never or hardly ever have to really travel to see the bands I like or do not go. Living in a big country someone always has to travel to see their favourite band, unless they happen to play in town. For Muse Cologne is it for Germany until the fall for the arena tour.

The final shout out goes to the public transport. The loads of people were all sped back to the city centre swiftly. Well done! 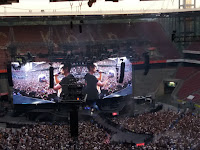 Going to Muse in Cologne and combining it with a long weekend is a great way to visit a town. Cologne presented itself to me, once again, as a totally easygoing city where people go about their way in a totally relaxed way. Drinking beer on the streets, at the border of the Rhine river as we did late after the show with hundreds and hundreds of locals. Only after a Curry Wurst mit Pommes of course.

I am not a fan of Andy Burrows. His music somehow just doesn't touch me. It is nice if it comes by but you won't find me looking for it. We heard him from the outside and inside. To give credit where it is due. Burrows played a very decent set and stood his own in an mainly uninterested stadium. The hardcore Muse fans in the front however responded extremely kindly to his music, so the evening must have been okay for him. Heat and all.