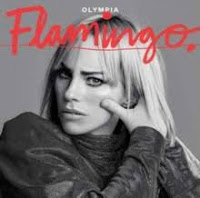 Two albums reached me recently that had the caption 'two Australian indie rock ladies'. Angie McMahon's 'Salt' and Olympia's Flamingo. 'Salt' finds its way to these pages in a few weeks, already I can state that the two albums are very different beasts. Let's take a closer look at Flamingo first.

Olympia is Olivia Bartley who shares her second album to the world, after 2016's 'Self Talk'. Together with producer Burke Reid (e.g. Courtney Barnett) she worked for two months to get to the level she wanted to reach for Flamingo. With the help of Donny Benet (bass), Peter Luscombe (drums) and Ben Hauptman (additional guitars) a band sound was crafted that sound utterly convincing from beginning to end. This is not the same as saying that I like all songs as much.

What Flamingo does achieve with the first listen sessions is to acquire a positive form of attention. Many of the songs are attractive and simply interesting to listen to. Bartley's voice is the right kind of mix between girl and roughness to appeal to me. The hint of innocence and of toughness is an interesting mix on Flamingo. The lyrics belie the innocence. Olympia has enough experience with living, to share her experience with longing, doubts and caring all in one with her listeners. Her Debbie Harry like looks do help to attract attention as well.

Where I have doubts with Flamingo is when songs get close to the Pink kind of bombast, that could make Olympia a world star of course. This is not the road taken in the end though. Just as easily Olympia tips her toes into the early 60s girl groups, where Lana del Rey has a permanent residence. In between is the alternative rock many Australian ladies are making a name for themselves in. Olympia is on the neat side of this version of rock, but certainly knows her way around there. When all is said and done it is the alternative side that wins out.

The result is an album that swings between the alternative and an edgy, rough kind of pop music. Flamingo has not convinced me for 100% yet, but is certainly an album I want to draw your attention to as there are many things happening here that are very much worthwhile listening to. So it may be in the clouds were Flamingo and I will wind up. The first stretch is promising though.