Help Us Stranger. The Raconteurs 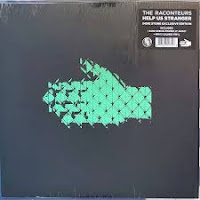 The Raconteurs return to the front after an hiatus of more than a decade. The return comes with a musical storm and accolades galore. The Raconteurs are back and the world should know it.

In the meantime Jack White has released albums under his own name and in other guises. Brendan Benson released several solo records as well. Less conspicuous in the public eye, but some certainly very much worthwhile listening to, as you can find on this blog.

The Raconteurs, wasn't that the band with a great, great single, but an average album and that great album, without a hit single? Yes, in my mind the band divided its two previous album this way. 'Steady As She Goes' is one of my absolute favourite songs of the 00s, while 'Consolers Of The Lonely' is a very good album.

So how does Help Us Stranger fare? If there still was such a thing as singles in the alternative rock world, Help Us Stranger would contain several, while as an album the ranking is far above average. It simply is one of the better albums of 2019. Easily, two fingers in the nose, as they say of cyclists racing up a mountain without any, seemingly, effort.

The Raconteurs presents the world several great rock songs and a few fantastic alternative ballads. All seems to come together on its new album. In the experimenting with sounds and some, almost weird, dynamics. In 'Don't Bother Me', things go to the edge of irking my ears extremely, were it not that the song is so extremely tight.

A band The Raconteurs has listened to very closely is Led Zeppelin. The break and solo in 'Don't Bother Me' is classic Led Zep. Just like the folk influence in the final song 'Thoughts And Prayers' presents us every lick and stroke Jimmy Page presented the world with when he played an acoustic guitar. Showing influences is great as long as the song that contains them are great. And that is the case on Help us Stranger.

Apparently The Raconteurs tried to write a new album in 2013, but nothing came from the sessions. Listening to this album six years later one can only wonder what happened six years ago. The interaction between the individual members and the fact they, especially Benson and White of course, provide each other the spot to shine, shows that the band has found a comfortable position to work in. The solid rhythm section certainly deserves a mention as it provides the bed on which all else happens.

The only negative comment to make would be that some melodies of the songs remind me of other, older songs. Not in a major way, so The Raconteurs will be alright in that department. It is also the only one I can make. Help Us Stranger so perhaps is not perfect. Thanks to the different moods the band takes the listener through without losing an inch of attention, shows how good this album is. I did not buy the album deaf, but should/could have.

You can buy Help Us Stranger here: