We both know the rest is noise. Moss 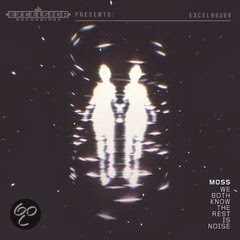 This is one of the moments that I realise that this blog is running for over two years. When I start reviewing an album by a band who's previous album was on this blog also. Yesterday Blood Red Shoes and now Moss. We both know the rest is noise is Moss' fourth album and shows the steady progress the band is making. As far as I'm concerned We both know... is the best since its debut album. Another great release in the year 2014 and Dutch bands are competing as hard for a top 10 position at the end of this year as bands from the U.K. or U.S. who more habitually are in these lists on my side of things. Moss certainly will be contending in 2014.

We both know... is an urgent album. Moss has rediscovered rhythm it seems. Drums play a prominent role on We both know... Several songs are fast driven, rhythmically dominant, with clear influences from dance music as well, without the music not being Moss. Having listened to this new album for several times now, it is clear to me that this direction is the correct one for Moss to take. To develop the link from 'Never be scared/Don't be a hero' to 'Ornaments' further would mean that one day the listener would have been presented with total silence, non-songs, atmosphere. Somewhere in the past year Marien Dorleijn, the principle songwriter of Moss, seems to have been kicked hard in the rhythm part of his creative brain cells. Listening to some Radiohead might have helped here. 'Reset' is so obviously Radiohead that this must be the correct conclusion.

We both know... has these songs on it that seem like the devil is high on the heels of Moss. Onwards and forwards it goes, ever forward. The 'Sweet nothings' like point of rest in the form of the beautiful 'Bruised' is a welcome one by that point into the album. The Velvet Underground as a whole can be mentioned here as a reference point for We both know... 'She's got a secret' has the same sense of urgency 'What goes on' has. A hellhound on Moss' trail. The brilliant way the electric guitar kicks in twice, the great bass line that gets the full spotlight. 'She's got a secret' is a declaration, not a song. Some The Strokes guitar playing can be found also on this album. All aimed at making a song better, without giving away one inch of Moss' identity.

Another pattern on We both know... is that voices make up a large part of the instrumentation. Oohs and aahs and snippets of lyrics are used to fill up all corners of several songs. This element makes We both know... on the one hand sound very busy, tense even, but on the other creates this beautiful atmosphere. This last word is the right description for the whole album. It is extremely atmospheric. So when there is a song without any drums, 'Slower end', it just fits in beautifully. Bringing the frantic pace down allowing the listener to breath. With 'This is the end of everything' We both know... gives away its price song. Slow, beautiful, fantastic.

We both know... is, next to all the other things going on, a sonic adventure. There is just a lot going on in the many layers and textures of the sound that make up this album. Moss has not only rediscovered drums, but all sorts of keyboards come by also. In the form of soundscapes, psychedelic organs from the past or more "normal" sounding. Delightful retro sounds escape these keyboards, while Moss doesn't shun a modern sound as well. Guitars are played in a sonically, rhythmic way. A bit like Radiohead, but also The Cure comes by. The form in which the title song plays out with its long intro, shows that despite all this name dropping, Moss is out there with the best of them. I can't wait to see the band play live to be honest. This hypnotic music must be something to watch and listen to.