After the disco. Broken Bells 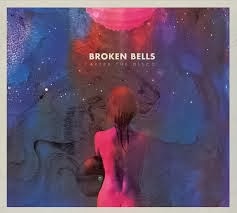 Wow!, what mixed emotions does After the disco shakes loose in me. One moment I truly hate and at other times I just think it has sublime moments. This shows that I have played the album several times by now, with all these confusing moments as a result. I can't really tell yet which one is going to win, but perhaps neither will. Is it just the moment and mood I'm in.

Broken Bells is the duo James Mercer and Brian Burton a.k.a. Danger Mouse and some other guises. A combi of pure pop and pop dance. Mercer has made at least three master pieces with his vehicle The Shins, with the exquisite 'St. Simon' as absolute top of the tops. Burton has scored a worldwide hit with Gnarls Barkley's 'Crazy', that fantastic dance-pop cross over. Their start as a duo was an album that I personally felt was quite disappointing. It wasn't the best of both worlds. And that is what After the disco certainly is. Golden pop melodies come by with a soft underbelly of plopping bass and percussion.

If something makes After the disco stand out, then it is subtlety. Hardly ever is anything laid on thick. Many soft and pleasantly flowing melodies submerge the listener into the inner world of Broken Bells. At the start of the album it is Bee Gees like disco and singing that make alarm bells go off. After the Disco? or in the disco?, to bring the title of that strange single from Rotterdam's Noodweer in remembrance, that's the question. It's just the start, after which things go off in a The Shins direction with estranging elements. Still, the likeness to Bee Gees is not so strange. The brothers Gibb were able to write perfect popsongs as well, that seldom were anywhere near the beaten path. Listening to their oldest hits with the ears I have now, made me realise that there is not much to compare Bee Gees music to in 1967-1970. It was in its own league. Broken Bells is not as it references this music, while hitwise it doesn't come anywhere near.

Title song 'After the disco' opens the album. The song brings the first hits of The Human League to mind. 'Don't you want me baby' and 'Open your heart'. The synth sounds come very close with the mechanic beat under the (very real) song. A tone is set for After the disco, which 'Holding on for life' continues easily. Plop plop-plop goes the bass, James Mercer's voice goes up and up and in the chorus that magical moment happens that 'Saturday night fever' Bee Gees come back to life. And in the right mood, it wins me over for After the disco. The chorus is so much fun, then. As is the punky bridge, with a rough sounding guitar in the background giving the song a total different flavour for a few seconds. Just very well done. In 'Leave it alone', a more quiet song, the chorus gets to the same heights, with a little Air of 'Moon safari' fame tossed in for good measure. The very faint keyboard sounds in the background. That floating through space kind of experience 'Moon safari' offered in its best songs?, 'Leave it alone' has just that.

After these outings the album comes into more "normal" waters, but also becomes more average. In the sense that it has no more peaks or canyons. The level of music is high, but to notice this it is also necessary to distinguish between songs and that part I find hard to do. So I decided to start the album halfway instead of at the start. Straightaway the Air influence hanging over 'The changing lights' comes to light. The immense lightness of being that comes with the song. The beats give me the sensation I'm floating on them. The lightness of the singing does the rest. The delightfull high and lower voice. All stopped off with a late 1970s Christopher Cross sort of mood. 'Control' is able to do the same to me, with a hidden dirty guitar melody in the mix, that lifts the song up even further. Not to speak of the horns kicking in near the end. 'The angel and the fool' is simply a beautiful ballad.

By then it's clear, I have to pay closer attention to what is happening on After the disco. Mercer and Burton have created an album full of subtleties that ought to be digested in a serious way. If listened to carefully and with the attention it deserves, I can only say that Broken Bells came up with an album that is the best of both worlds between The Shins and Danger Mouse.