Burn your fire for no witness. Angel Olsen 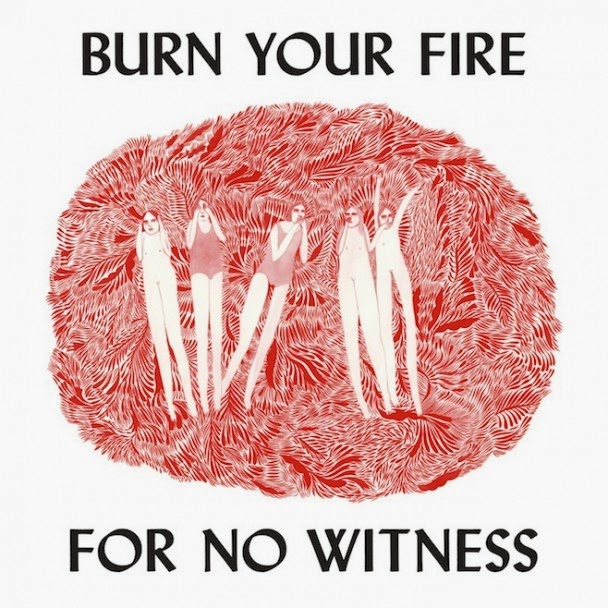 Angel Olsen is an American singer-songwriter from St. Louis, who has worked with Bonnie 'Prince' Billy and the Cairo Gang. Burn your fire for no witness is her second full length album, the first one noticed by me. And what an album it is.

Having Will Oldham as a starting point for this review is not such a strange claim to stake. Several of Angel Olsen's songs also have this mystical atmosphere that could have put them down as a recording from anywhere in the United States' history, if only they had had recording devices in the 18th or 19th century. Where Oldham often stops there, Olsen dives deeper and certainly further. It is at this point that the adventure that Burn your fire for no witness starts.

The album starts off with a song with a very interesting title 'unfucktheworld'. A very lo-fi recording, that could have been recorded anywhere at any time with a minimum between Angel Olsen and the recording device. If you listen carefully you hear one vocal overdub, ghostly in the background. That is all. Voice, guitar. Don't expect any world encompassing statements. 'Unfucktheworld' is purely personal, about "mending troubles in her heart" and about "losing her reasons". No matter how small this song is, it is a 100% certified Nirvana song. Just plug in and it will happen.

The change to 'Forgiven/Forgotten' is large. Angel Olsen does plug in and comes up with a The Velvet Underground cum Dum Dum Girls rocker. The mood is still lo-fi and the world is not well if someone has to be forgiven a thousand times for loving someone. Let's change again to an electrically charged country tearjerker. ("I feel so lonesome I could cry". The stage for this album is clear I'd say.) This combination works well by the way. The tear in the voice of Angel Olsen with the tear in the distorted guitar sound. The piano kicking in half way through the song gives 'Hi five' this little extra. It is in songs like these last two that Angel Olsen goes well behind Bonnie 'Prince' Billy.

A song like 'White fire' on the other hand could well be on an album of Bonnie Prince' Billy. It is a subdued, very traditional folk song. Well, at heart that is, but all these little atmospheric disturbances are let into the background. It's never totally clear what exactly is going on. A musical equivalent of suspense, the hint at horror. Listening objectively there is not much going on in 'White fire' and still I cannot stop listening to the song. At the same time I'm reminded of what Gretchen Lohse does on her debut album 'Primal rumble'. 'White fire' is one dimension deeper in atmosphere, but both singers aim for the same result: a very attentive ear from the listener, while at the root of things singing a folk song.

With 'High & wild' Angel Olsen really surprised me. She brings a great pop feel to this dark song. With a John Cale pounding piano driving the song forward, I'm wishing on the spot that Angel Olsen could take Nico's place in some The Velvet Underground songs during a tour that will never happen again.  Burn your fire for no witness keeps this balance between band and smallness intact to great effect. With 'Iota' there is even a song with a distinct 50s feel. An acoustic guitar and brushes on the snare. The plucked bass is the dissonant here.

There may not be many rays of light on Burn your fire for no witness but that is no problem in winter. Whether this is also true in summer, time will tell. Loneliness springs up from every note, something that is not changed by the musicians around her. Angel Olson has made an album that should get her a status Elliot Smith had. She creates her own universe around folk tunes and takes them in directions that not everyone does. That sets her apart in a very pleasant way from the fold.