Come As You Are. The Story Of Nirvana. Michael Azarrad 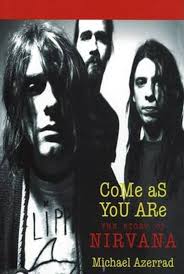 'Smells Like Teen Spirit' was, granted with 'You Could Be Mine', the song that pulled me back towards listening and appreciating new music, after having, musically, barely lived through the 80s. It was late 1991, studies finished, struggling to find meaningful work and the two videos in heavy rotation on MTV, when that station still broadcasted music for a living.

We all know what happened then. The multi-million selling album 'Nevermind', the harsh sounding 'In Utero'. I put it on with my new born son sleeping in his maxicosy and knew at the first note of the album that the little critter was not deaf. All his limbs moved in one direction at once followed by a large wail. (It took a few more years but he became a Nirvana fan.) That first, dissonant note of 'In Utero' was a statement for sure and a scare for all fans probably. Then the attempted suicide and a month later the end. I remember being glad not having bought a ticket to the cancelled NL show. It all ended with the brilliant 'Unplugged' cd (and show). After that Foo Fighters and rehashes of left overs. And a few pretty decent Hole/Courtney Love cds.

A while back I saw parts of the 'Montage Of Heck' movie and remember thinking "what am I looking at"? Total madness, derangement and people with some serious issues. This impression was not changed by reading a book on Nirvana, the writing having started straight after the breakthrough and finished in time to draw attention to itself after things were at its worst for all concerned, except one who wasn't present any more. I had bought the book 20 years ago at a record store long out of assistance. And never started reading it until recently. Why now? Who knows?, it doesn't matter.

Just like the movie for at least 50% of the book I would not have minded not to know about the misery of the private life of Kurt Cobain. The misery of his childhood, the schlepping himself from one home to another, always screwing things up for himself and everyone around him, the torment of other kids, the seemingly seeking of misery. The misery of his stardom and the misery of his marriage. The mysterious stomach aches that always were worse when having to perform. And finally the end where things must have really gone wrong, when Cobain had slipped beyond the attention even of the writer of his biography. Connections had been tied off after a comment of the writer on what had passed in Rome and whether that had been a suicide attempt or not. The writer perhaps even gave a little push towards the end, is what I could read between the lines of the final chapter.

Through all this misery one thing stands out: the magic moments of creating music, the quality of the songs, the enormous talent that this scrawny man from Aberdeen, Washington was endowed with and that it was not enough to save him. In fact it may have done him in. It was too much for him to bare. Everything coming with that talent was far too much to carry for a fragile person without firm anchors to tie him down. Having Courtney Love as a wife probably did not help either. She does get the Yoko role from nearly everyone. And this may just be the right conclusion.

Some biographies are fun to read. This one was not for at least 50% of the time. Why? It is all too embarrassing, too depressing, too negative. From hard drinking, to fights, to stealing medicine, to depression, to drinks, to drugs, to negativity, to suicide. And don't get me started on the role of the so called society press in the lives of Kurt and Courtney. There are some clear linkages here with the Amy Winehouse story for sure. There's just no end to it in this book. It simply so sad.

One thing specificly struck me. Kurt, in a negative mood, looks 20 years ahead and give a pretty accurate description of where we are in the late 10s. People involved mostly with their smartphones and games. To individualistic to really go after rock bands, while music in general indeed has become formalistic. He was right there for large parts.

Reading about Nirvana it seems the band did not have things running for them in 1994. Dave Grohl would have left is my guess. He would have started to release his own work and if that had grown the way it did, he would have left. The alternative seems unlikely. Cobain was the principal songwriter who would never have allowed a second captain on the ship, despite his fantasising about it. If he had, Dave would have brought his first songs already. Just imagine 'This Is A Call' on 'In Utero'. That would have been a jolt, wouldn't it?

Man, am I glad I am nothing like Kurt Cobain or Chris Novoselic. No, I do not have the talent either, but I prefer things stable as they are. When all is said and done and written here, what remains is a simple thank you. For the great music, as that goes beyond saying.

As an afterthought it comes to me that Kurt Cobain is dead for 25 years. 'Nevermind' will be 30 years old two years from now. The Nirvana shirts and sweaters have not totally disappeared from the streets but they are slowly. A whole generation has grown up having heard the band from their parents, at best, without the chance to ever see the band live. They have the DVDs. 25 Years, time sure does fly.