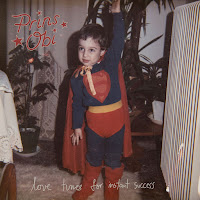 Only this winter Prins Obi debuted on these pages and already he returns with a new five tune EP. The eponymously title LP was an eclectic affair. The music shot out in all sorts of ways, but the 60s and early 70s were a constant factor in that eclecticism. With Love Tunes For Instant Success things are no different. Prins Obi is all over the place.

To shortly recap. Prins Obi is Georgios Diakenesis, singer of the band Baby Guru and a pharmacist in a more daily life. And one day, long ago he was Superman, like my son around the same age was Batman, swinging, ever so carefully, on the stairs of the open staircase.

Listeners who do not mind listening to an album without the firm anchor of a defined musical style and do not mind an extra surprise on route, may proceed. Love Tunes For Instant Success starts with a Zappaesque song, reminding me of songs he made with the earliest The Mothers of Invention. Those quirky pop tunes they produced together. Somehow it seemed like they were playing a regular pop tune, but the way they played and certainly the singing was so warped, that every poploving teenager was hiding behind the curtains instantly. Prins Obi finds this balance as well. This is pure pop in many details, but the estrangement woven into the songs and the singing, takes the song away immediately from the likes of The Hollies, just to name a popular band of the time.

'The Girl With The Golden Hair' is the most worked out song on the EP. Progressing into the album a piano or an acoustic guitar becomes the driving instrument. Just listen to how small 'Seasonal Beast' is kept. A soft drum and a few bass notes accompany the piano and singing. A soft song about an egocentric person, knowing full well he is one. Slowly more instruments are allowed into the song, accentuating the soft beauty of it.

With 'Silhouette', a song played on an acoustic guitar, I had the impression to listen to an instrumental, before, rather late, a voice sets in, almost as a surprise. At points were it had been normal nothing happens vocalwise. First the song changes texture fully. Again other instruments are allowed in, slowly and delicately. Except for the drums that have a distinct De Kift ('Hoofdkaas') quality. 'Happiness' is even smaller. Just Diakenesis, his acoustic guitar, an instrument I can't remember the name of and a choir. It is enough to make an effect.

The piano song 'Maiden Voyage' does remain instrumental. No band just a piano. These kind of songs do make Love Tunes For Instant Success more a solo effort than 'Prins Obi And The Dream Warriors'.

I can imagine these five songs being leftovers from previous sessions, where 'Girl With The Golden Hair' is either really new or did not fit with a combination of other songs. The other four are songs that deserve a release. In fact I truly enjoy Love Tunes For Instant Success. Now let's go and try one out. It must be a success as six years ago Prins Obi released an EP called 'Love Songs For Instant Success'.

You can buy Love Tunes For Instant Success here: