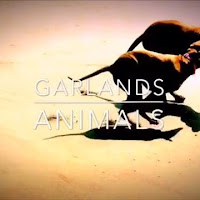 With its new EP Animals Garlands returns to these pages. Just over a year ago 'Golden Sounds' was favourably received, just like Gordon Harrow's solo EP 'Indian Giver' was a year before that.

What appeals so much to me on Animals? That question is extremely easy to answer. The brazen way rock and pop gets blended in the four songs. Garlands is not afraid of going full out on both, resulting in four songs that have power in combination with an uncontrollable urge to dance and sing along. In my book that are pretty unbeatable elements.

The album opens with 'Protector'. The drum beat opening brings me into Guns 'N' Roses territory immediately. The second half of 1991 when the song starting with a drumbeat like this, 'You Could Be Mine' and Nirvana's 'Smells Like Teen Spirit' opened a whole new leash on music for me after years of ever more disinterest in new music.

The music has nothing to do with GnR. Garlands is far more interesting. Guitars and an equally pumping bass follow the drum intro. The alternative rock melody fits in with rock music coming out of the U.K. since Oasis and Blur battled it out in the 90s. This is a pop gem with loud guitars. With a drummer pounding away as if he has to catch the last bus, driving the whole band up in front of him like cattle to the corral. 'Protector' is a great opener for the new EP. Urgent and good.

Next up is the animal section of the EP. First comes the firm rocker 'Wolves & Foxes'. The guitar rhythm stutters, giving the song something very own. Yes, it's been done before, but somehow in 'Wolves & Foxes' it sounds totally fresh and again hurtles the song forward, seemingly at breakneck speed. The pop feel of the refrain and the drum and bass part in one of the verses, makes the song near perfect. The chorus is instantly singable. What more can I say but: I totally love it.

The title song is up next. Again there's no doubt about the commitment of Garlands to rock out in the most positive of ways. In this song the influence of early Supergrass shines through. The most Britpop of the four songs 'Animals' is. Singer Gordon Harrow throws the lyrics into the face of the listener with total abandon, like there's no tomorrow. There's a world to win out there and the only way to win it is by going for it 110%. That is what I'm hearing here.

After four songs it is all over already. Before that is the case a final rocker is unleashed on my welcoming ears. 'You Say You Know What You Don't Want' is another totally convincing rocker. The dirtiest of the four. Again the melody is lovely, catchy, with a U.S. undertone, before the dirty guitars go at the instrumental intermezzo. There are no solo's, but chords played just a little differently, like The Who was great at long ago. "You're prettiest girl I've ever seen", sings Harrow. If so, seeing her must have been an inspirational experience. What a song to end this EP with. A storm no less. Leaving me behind longing for more, more, more, with no choice but to put it on again.

There's only one conclusion left. Garlands is a band that deserves a lot more attention. So let's start modestly here.