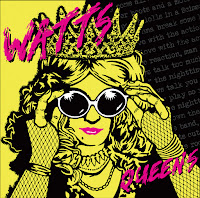 Can anyone explain to me why Queens is such a fun song? Listening to it I can think of at least a dozen songs in my collection that have this sound, come close in melody, even the guitar solo flying in at the end is lifted from something else. Whether Slade, T. Rex in the 70s, punky rock music a few years later, everything by Aerosmith, the early 90s rock revival, it all comes by. And hell yes this is so much fun.

Queens backed by 'The Night The Lights Went Down' are two great rocking songs. The kind I love to sing along to, the sort of song I want to hear when I'm ready to unwind, just before having to cook dinner after a long day. Dancing in the home, relaxing, the stereo loud and totally overwhelming.

Watts is a rock and roll band from Boston releasing its new single. Sounding like they have been around for a while and judging from the photo's, they are. Guitar riffs fly around, the dynamics in oth songs are just right, providing air when needed and going full out, making the effect double. "I'm in love with the action man", no kidding!? and where did I hear such a line before? ('Ashes To Ashes' of course.) The voice of Don Kopko on Queens is deliciously rough. The edge just enough to make him the more believed.

Watts has (at least) two lead singers. Johnny Lynch takes care of the second song. An even tighter guitar driven song, with a great tambourine driving the song forward in the right places.

Not one thing on this record hasn't been done before on this 7", but there's simply no sitting still. It's not only great music, Watts plays rock and roll as it is supposed to be. Tight, might and so melodically right. Ta-ta-da-tada-tada-ta-da. Riff away!

You can listen to and buy Queens here: