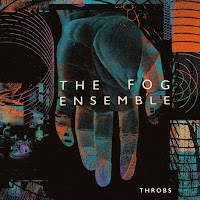 Until quite recently I associated Greece with sunshine, Retsina, Greek salads, pita giros and souvlaki's. Having visited the country quite often in the 90s and 00s on a yearly basis as a tourist and later a few times for conferences. Musically I only heared Greek pop music or the Rebetika, both not exactly to my taste. And in the more distant past Demis Roussos/Aphrodite's Child and Nana Mouskouri of course.

Something changed in 2018 when I got acquainted with Inner Ear Records. First I reviewed Tango With Lion's last album and here is the new album of The Fog Ensemble. Again one that I instantly liked. The difference between the two bands is huge. The Fog Ensemble plays what appears to be called post-rock. I never understood that term, but who cares? By the way, The Fog Ensemble is from Thessalonica, a nice city in the north east of Greece where Chris & Carla of The Walkabouts recorded their best duo album ever.

On Throbs the pleasant kind of rock can be heard. Nicholas Kondylis plays bass, George Nanopoulos drums. The drumming is extremely powerful when needed. A potential skinbreaker Nanopoulos is. Together they provide the firm foundation over which Antonis Karakostas plays his guitars, creates his loops and does his programming, both prominently present in the music. There are no vocal melodies involved. Usually I take that as a sign a band couldn't find a singer. In the case of The Fog Ensemble I do not miss a singer for one second.

Each song starts with a firm, basic chord progression. From there the journey starts. Slowly a song evolves around a guitar motive or a keyboard melody (unless it's an extreme guitar effect, an option I can not exclude). By playing with the dynamics within the song a diverse set of seven songs is presented, making Throbs an interesting and powerful album. Things are topped off with exquisite chord changes, creating a song without a vocal melody. A compliment in my book. 'Breathe' is the best example on this record.

The first reference coming to mind is the Norwegian band Soup, who entered my universe last year with the album 'Remedies'. Like Soup The Fog Ensemble is able to create a soup of noise without losing the focus on the central theme, the melody and the end result: a song.

This trio creates a lot of noise for a threesome. Impossible to recreate on stage without at least one extra guitar and/or keyboard player. In the studio this is just fine. Use the options it offers to make the best product possible. In this The Fog Ensemble succeeded fully and completely. Fans of (post) rock and of the more straightforward progrock kind should find their way on Throbs. Even as an overall less enthusiastic fan of these kind of rock, I certainly did. There is simply too much to discover and done in such a great way, that there is no escaping Throbs.

You can listen to and buy Throbs here: